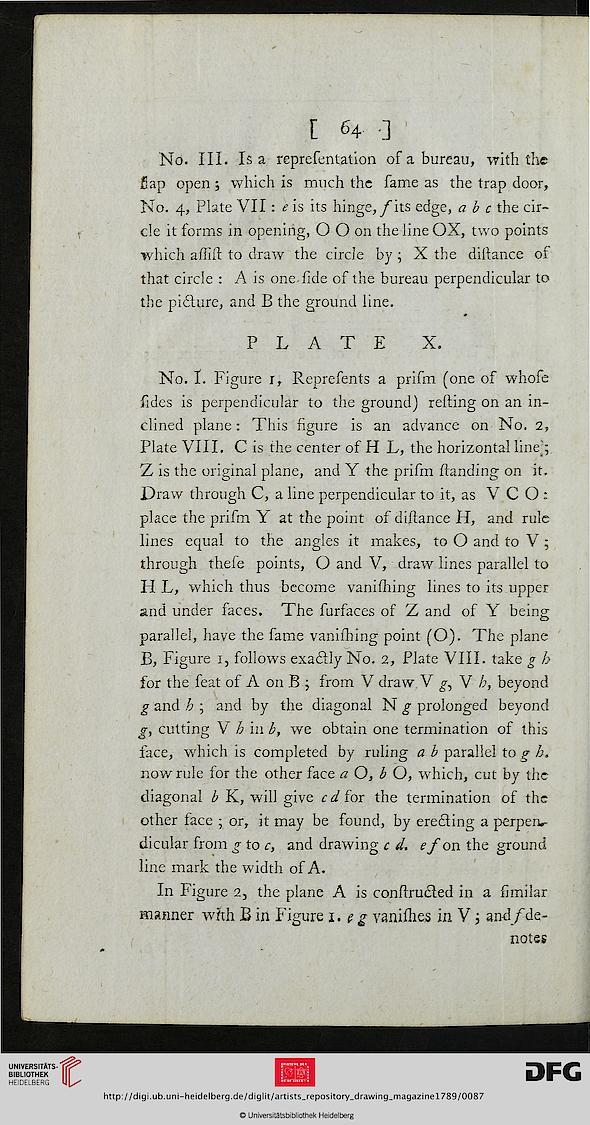 Information about OCR text
[ 64 ]
No. III. Is a representation os a bureau, with the
£ap open , which is much the same as the trap door.
No. 4, Plate VII: e is its hinge,/its edge, a b c the cir-
cle it forms in opening, O O on the line OX, two points
which assist to draw the circle by ; X the diltance os
that circle : A is one side of the bureau perpendicular to
the picture, and B the ground line.
PLATE X.
No. I. Figure r, Represents a prism (one of whose
sides is perpendicular to the ground) retting on an in-
clined plane: This figure is an advance on No. 2,
Plate VIII. C is the center of H L, the horizontal line’;
Z is the original plane, and Y the prism handing on it.
Draw through C, a line perpendicular to it, as V C O:
place the prism V at the point of distance H, and rule
lines equal to the angles it makes, to O and to V ;
through these points, O and V, draw lines parallel to
H L, which thus become vanishing lines to its upper
and under saces. The surfaces of Z and of Y being
parallel, have the same vanishing point (O). The plane
B, Figure i, follows exadtly No. 2, Plate VIII. take g h
for the seat of A on B ; from V draw V g, V b, beyond
g and h ; and by the diagonal N g prolonged beyond
gy cutting V h in b, we obtain one termination of this
face, which is completed by ruling a b parallel to g b.
now rule for the other face a O, b O, which, cut by the
diagonal b K, will give c d for the termination of the
other face ; or, it may be found, by erecting a perperv
dicular from g to c, and drawing c d. ef on the ground
line mark the width of A.
In Figure 2, the plane A is construdted in a similar
manner with B in Figure i. eg vanishes in V; and/de-
notes