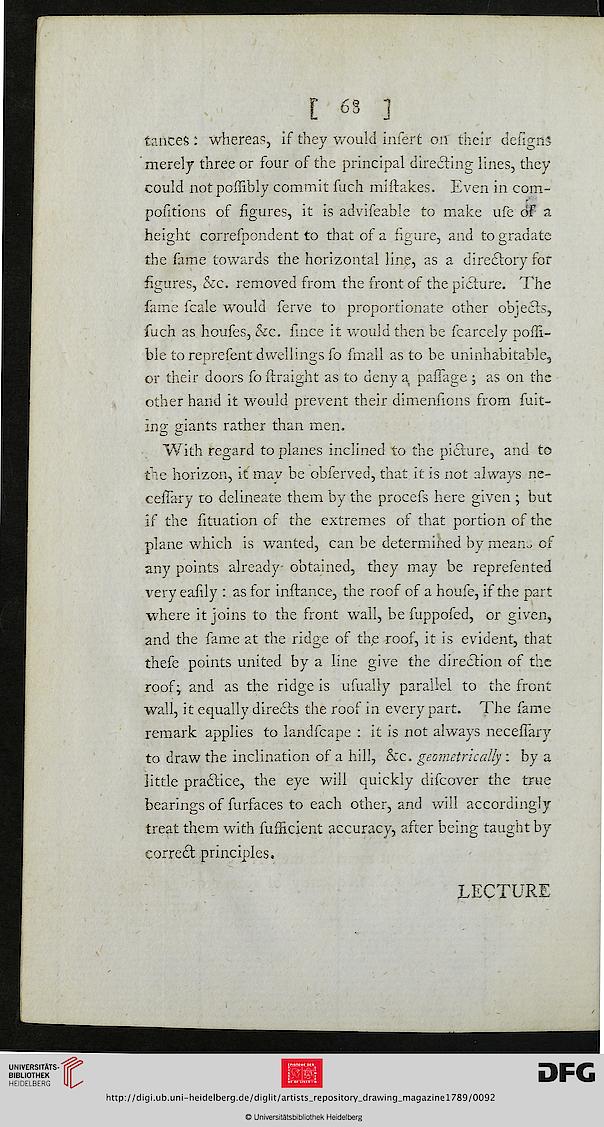 Information about OCR text
[ 63 ]
tances : whereas, if they would insert oir their designS
'merely three or four of the principal directing lines, they
could notposlibly commit such mistakes. Even in com-
positions of figures, it is adviseable to make use of a
height correspondent to that of a figure, and to gradate
the same towards the horizontal line, as a directory for
figures, &c. removed from the front of the pidfure. The
same scale would serve to proportionate other objedls,
such as houses, &c. since it would then be scarcely posii-
ble to represent dwellings so small as to be uninhabitable,
or their doors sostraight as to deny a passage ; as on the
other hand it would prevent their dimensions from suit-
ing giants rather than men.
With regard to planes inclined to the picture, and to
the horizon, it may be observed, that it is not always ne-
cedary ro delineate them by the process here given ; but
if the situation of the extremes of that portion of the
plane which is wanted, can be determined by means of
any points already obtained, they may be represented
very easily : as for instance, the roof of a house, if the part
where it joins to the front wall, be supposed, or given,
and the same at the ridge of th,e roof, it is evident, that
these points united by a line give the diredlion os the
roof; and as the ridge is usually parallel to the front
wall, it equally directs the roof in every part. The same
remark applies to landscape : it is not always necesiary
to draw the inclination of a hill, See. geometrically : by a
little pradtice, the eye will quickly diseover the true
bearings of surfaces to each other, and will accordingly
treat them with sufficient accuracy, after being taught by
corredfc principles.