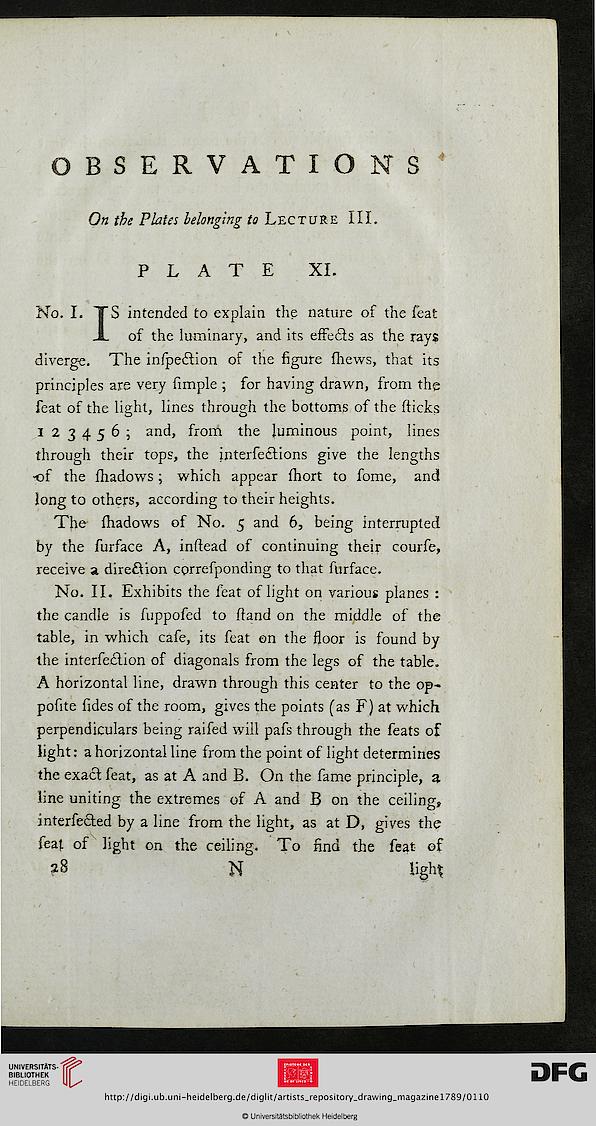 On the Plates belonging to Lecture III.
PLATE XL
No. I. TS intended to explain the nature of the seat
X of the luminary, and its effects as the rays
diverge. The inspeftion os the figure (hews, that its
principles are very simple ; for having drawn, from the
seat of the light, lines through the bottoms of the slicks
123456; and, from the luminous point, lines
through their tops, the interseclions give the lengths
of the shadows; which appear short to some, and
long to others, according to their heights.
The shadows of No. 5 and 6, being interrupted
by the surface A, insfead of continuing their course,
receive a direction corresponding to that surface.
No. II. Exhibits the seat of light on various planes :
the candle is supposed to Hand on the middle of the
table, in which case, its seat on the ssoor is found by
the interseclion of diagonals from the legs of the table.
A horizontal line, drawn through this center to the op-
posite sides of the room, gives the points (as F) at which
perpendiculars being raised will pass through the seats of
light: a horizontal line from the point of light determines
the exact seat, as at A and B. On the same principle, a
line uniting the extremes of A and B on the ceiling,
intersered by a line from the light, as at D, gives the
seat of light on the ceiling. To find the seat of
N light