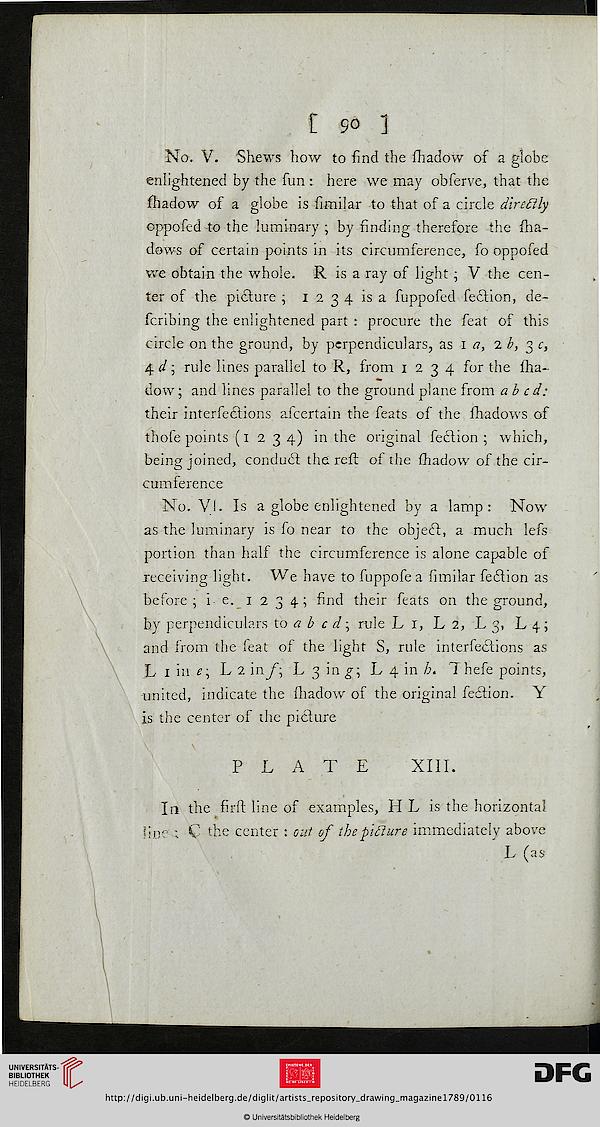 Information about OCR text
[ SO ]
No. V. Shews how to find the shadow of a globe
enlightened by the sun : here we may observe, that the
shadow os a globe is Similar to that of a circle diredtly
opposed to the luminary ; by sinding therefore the sha-
dows of certain points in its circumference, so opposed
we obtain the whole. R is a ray of light ; V the cen-
ter of the picture ; I 2 3 4 is a supposed sedtion, de-
scribing the enlightened part : procure the Seat of this
circle on the ground, by perpendiculars, as 1 i?, 2 b, 3 c,
4 d; rule lines parallel to R, from 1234 for the Sha-
dow ; and lines parallel to the ground plane from abed:
their intersections aseertain the Seats of the Shadows of
those points (1234) in the original Section ; which,
being joined, conduct the rest of the Shadow’ of the cir-
cumference
No. VI. Is a globe enlightened by a lamp: Now'
as the luminary is so near to the objedt, a much less
portion than half the circumference is alone capable of
receiving light. We have to suppose a Similar Sedition as
before; i- e. 1234; find their seats on the ground,
by perpendiculars to a b c d; rule L 1, L 2, L 3, L 4;
and from the seat of the light S, rule intersections as
L 1 in e; L 2 in_/~; L 3 in g\ L 4 in h. T hese points,
■united, indicate the shadow os the original sedtion. Y
is the center of the picture
PLATE XIII.
In the firlt line of examples, H L is the horizontal
line t C the center : ovJ of thepisiure immediately above
* L (as