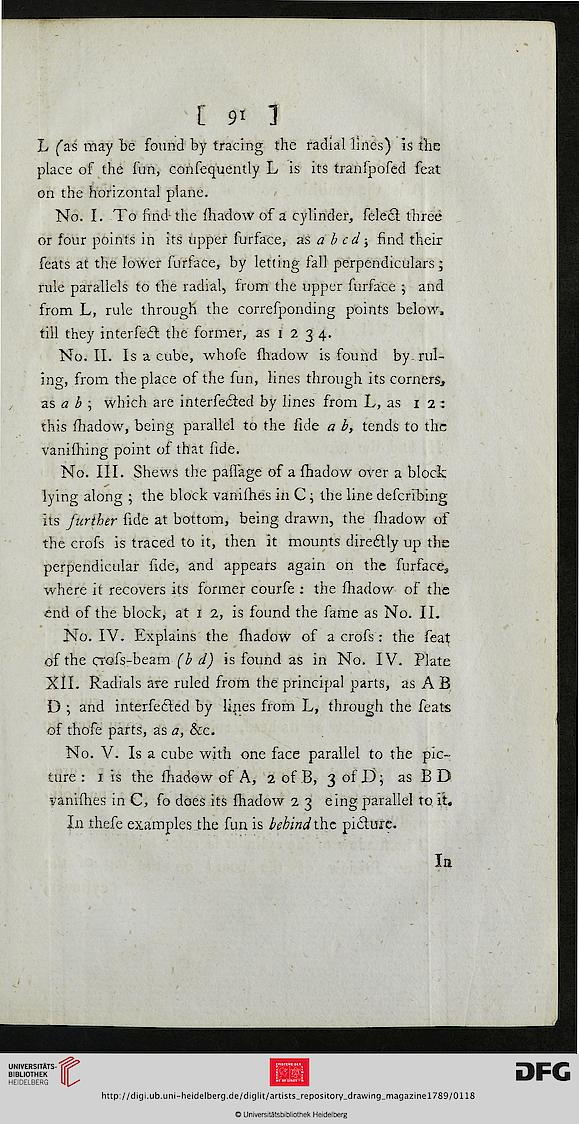 Information about OCR text
[ 9i ]
L sas may be found by tracing the radial lines) is the
place of the sun, consequently L is its transposed seat
on the horizontal plane.
No. I. To find the shadow of a cylinder, seled three
or four points in its upper surface, as a b cd j find their
seats at the lower surface, by letting fall perpendiculars j
rule parallels to the radial, srom the upper sursace ; and
from L, rule through the corresponaing points below,
till they intersed the former, as i 2 3 4.
No. II. Is a cube, whose shadow is found by-rul-
ing, from the place of the sun, lines through its corners,
as a b ; which are intersered by lines from L, as 12 ;
this shadow, being parallel to the side a b, tends to the
vanishing point of that side.
No. III. Shews the passage os a shadow over a block
lying along ; the block vanishes in C ; the line deseribing
its further side at bottom, being drawn, the shadow of
the cross is traced to it, then it mounts diredty up the
perpendicular side, and appears again on the surface,
where it recovers its former course : the shadow of the
end of the block, at 1 2, is found the same as No. II.
No. IV. Explains the shadow of a cross : the seat
of the crass-beam (b d) is found as in No. IV. Plate
XII. Radials are ruled from the principal parts, as A B
D ; and intersered by lines from L, through the seats
of those parts, as a, &c.
No. V. Is a cube with one face parallel to the pic-
ture : 1 is the shadow of A, 2 of B, 3 of D; as B D
vanishes in C, so does its shadow 2 3 eing parallel to st.
In these examples the sun is behind the pidure.