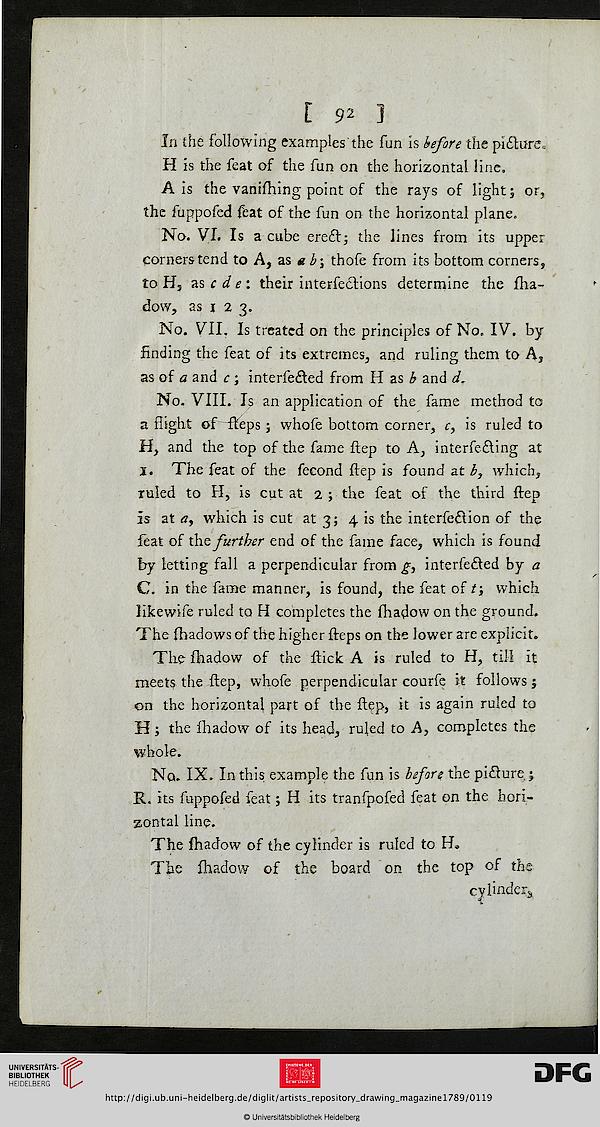 Information about OCR text
[ 9* 1
In the following examples the sun is before the pirure.
is the seat of the sun on the horizontal line.
A is the vanishing point of the rays of light} or,
the supposed seat of the sun on the horizontal plane.
No. VI. Is a cube erefl} the lines from its upper
corners tend to A, as ab\ those from its bottom corners,
to H, as c d e : their interseslions determine the sha-
dow, as i 23.
No. VII. Is treated on the principles of No. IV, by
finding the seat of its extremes, and ruling them to A,
as of a and c; intersered from H as b and d.
No. VIII. Is an application of the same method to
a ssight os ffeps} whose bottom corner, c, is ruled to
H, and the top of the same step to A, intersering at
x. The seat of the second step is found at b, which,
ruled to H, is cut at 2 } the seat of the third step
5s at a, which is cut at 3; 4 is the interserion of the
seat of the further end of the same face, which is found
by letting fall a perpendicular from g, intersered by a
C. in the same manner, is found, the seat of/} which
likewise ruled to H completes the shadow on the ground.
The shadows of the higher steps on the lower are explicit.
The shadow of the stick A is ruled to H, till it
meets the step, whose perpendicular course it follows}
on the horizontal part of the step, it is again ruled to
H } the shadow of its head, ruled to A, completes the
whole.
No. IX. In this example the sun is before the pirure }
R. its supposed seat} H its transposed seat on the hori-
zontal line.
The shadow of the cylinder is ruled to H*
The shadow of the board on the top of the
cylinder,,