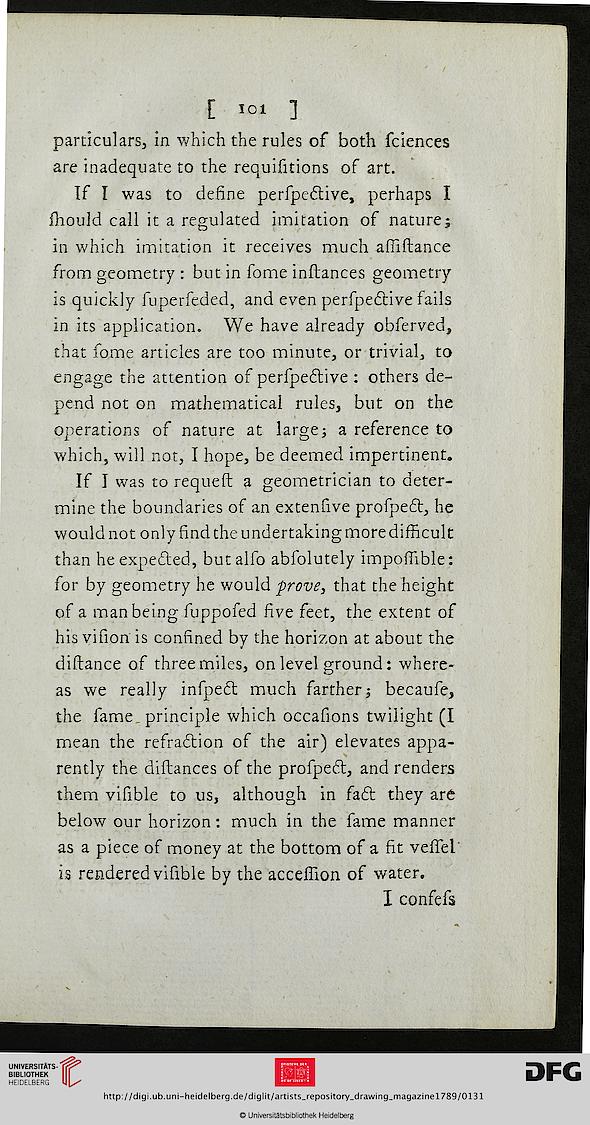 Information about OCR text
[ 1°1 ]
particulars, in which the rules of both sciences
are inadequate to the requisitions of art.
If I was to define perspeCtive, perhaps I
should call it a regulated imitation of nature;
in which imitation it receives much asilstance
from geometry : but in some instances geometry
is quickly superseded, and even perspedtive fails
in its application. We have already observed,
that some articles are too minute, or trivial, to
engage the attention of perspedtive : others de-
pend not on mathematical rules, but on the
operations of nature at large; a reference to
which, will not, I hope, be deemed impertinent.
If I was to request a geometrician to deter-
mine the boundaries of an extensive prospeCt, he
would not only find the undertaking more difficult
than he expected, butalso absolutely impossible:
for by geometry he would prove, that the height
of a man being supposed five feet, the extent of
his vision is confined by the horizon at about the
distance of three miles, on level ground: where-
as we really inspeCt much farther; because,
the same principle which occasions twilight (I
mean the refraction of the air) elevates appa-
rently the distances of the prospeCt, and renders
them visible to us, although in faCt they are
below our horizon: much in the same manner
as a piece of money at the bottom os a fit vessel'
is rendered visible by the accession of water.
I confess