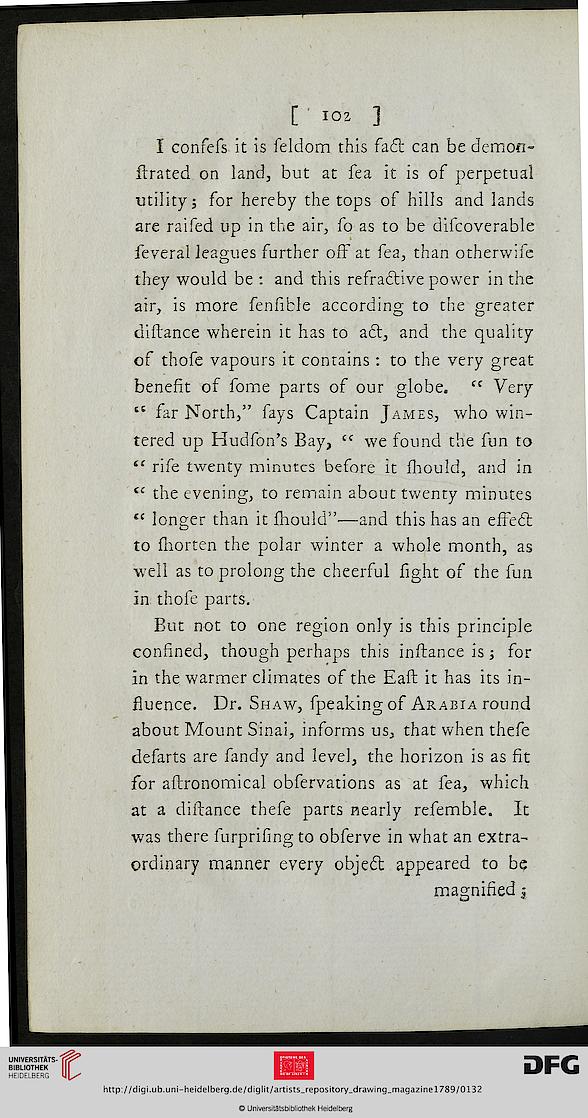 Information about OCR text
[ 102 ]
I confess it is seldom this fadt can be demon-
strated on land, but at sea it is of perpetual
utility; for hereby the tops of hills and lands
are raised up in the air, so as to be discoverable
several leagues further off at sea, than otherwise
they would be : and this refradtive power in the
air, is more sensstle according to the greater
dislance wherein it has to adt, and the quality
of those vapours it contains : to the very great
benefit of some parts of our globe. cc Very
“ far North,” says Captain James, who win-
tered up Hudson’s Bay, cc we found the sun to
“ rise twenty minutes before it should, and in
<c the evening, to remain about twenty minutes
<c longer than it should”—and this has an effedt
to shorten the polar winter a whole month, as
well as to prolong the cheersul sight of the sun
in those parts.
But not to one region only is this principle
confined, though perhaps this inslance is; for
in the warmer climates os the Easl it has its in-
sluence. Dr. Shaw, speakingof Arabia round
about Mount Sinai, informs us, that when these
desarts are sandy and level, the horizon is as fit
for astronomical observations as at sea, which
at a dislance these parts nearly resemble. It
was there surprising to observe in what an extra-
ordinary manner every objedl appeared to be
magnified ;