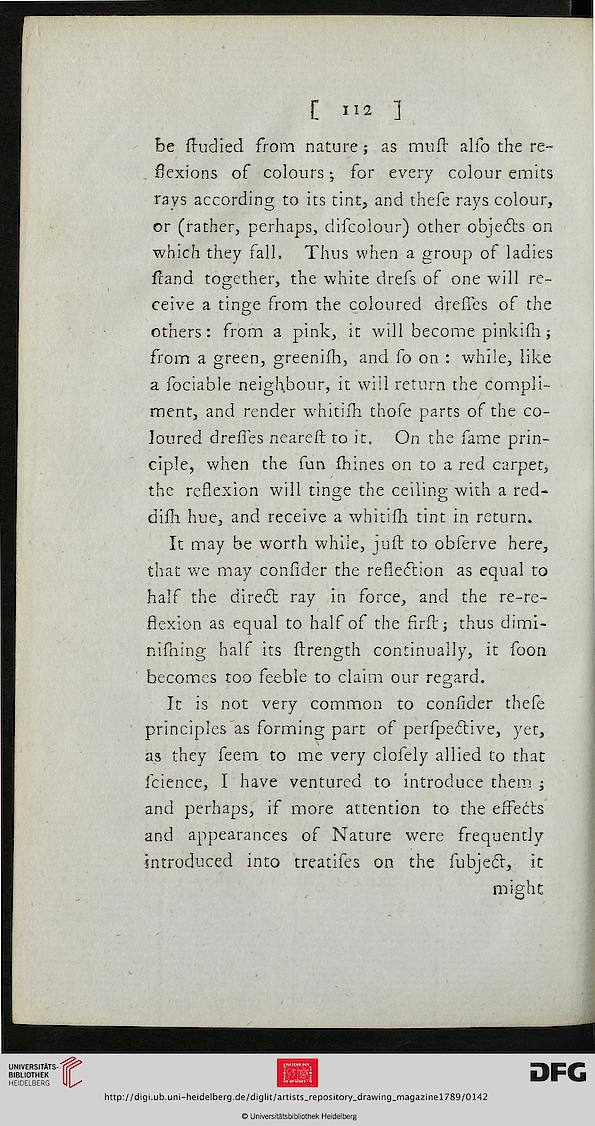 Information about OCR text
[ "2 ]
be studied from nature; as mud also the re-
flexions of colours; for every colour emits
rays according to its tint, and these rays colour,
or (rather, perhaps, discolour) other objefts on
which they fall. Thus when a group of ladies
srand together, the white dress of one will re-
ceive a tinge from the coloured dresses of the
others: from a pink, it will become pinkish;
from a green, greenish, and so on : while, like
a sociable neighbour, it will return the compli-
ment, and render whitish those parts of the co-
loured dresses near est to it. On the same prin-
ciple, when the sun shines on to a red carpet,
the ressexion will tinge the ceiling with a red-
dish hue, and receive a whitish tint in return.
It may be worth while, just to observe here,
that we may consider the ressection as equal to
half the diredl ray in force, and the re-re-
ssexion as equal to half of the fir st; thus dimi-
nisning hals its strength continually, it soon
becomes too feeble to claim our regard.
It is not very common to consider these
principles as forming part of perspedtive, yet,
as they seem to me very closely allied to that
science, I have ventured to introduce them ;
and perhaps, if more attention to the effects
and appearances of Nature were frequently
introduced into treatises on the subjeCt, it
might