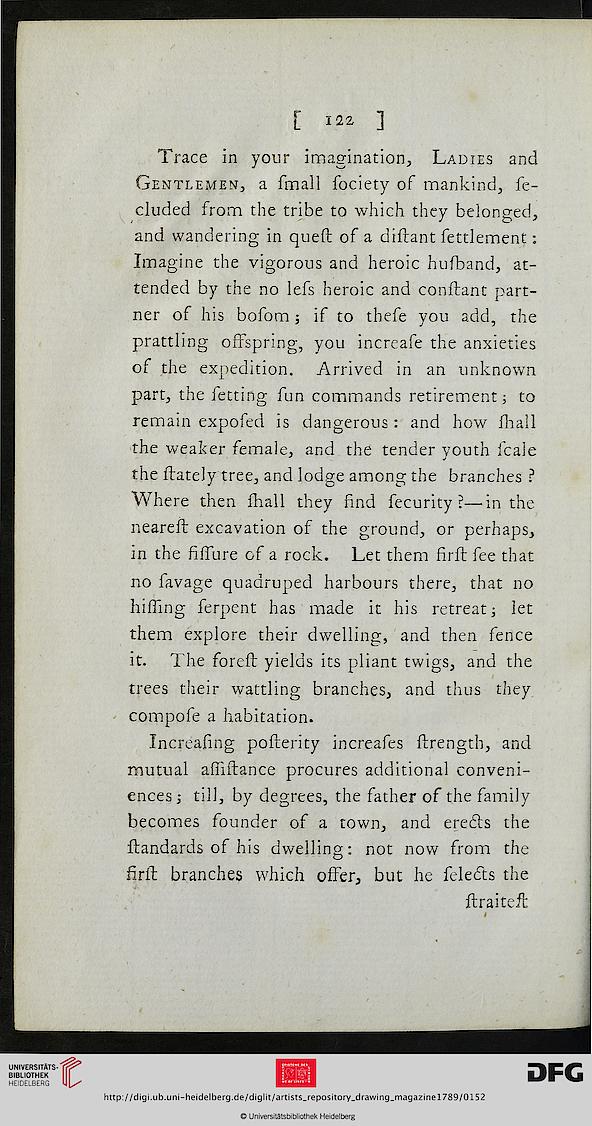 Information about OCR text
[ 122 ]
Trace in your imagination. Ladies and
Gentlemen, a small society of mankind, se-
cluded from the tribe to which they belonged,
and wandering in quest of a disiant settlement:
Imagine the vigorous and heroic husband, at-
tended by the no less heroic and constant part-
ner of his bosom; if to these you add, the
prattling osfspring, you incrcase the anxieties
of the expedition. Arrived in an unknown
part, the setting sun commands retirement; to
remain exposed is dangerous: and how shall
the weaker female, and the tender youth scale
* J
the /lately tree, and lodge among the branches ?
Where then, shall they sind security ?—in the
nearest excavation of the ground, or perhaps,
in the fissure of a rock. Let them fir st see that
no savage quadruped harbours there, that no
hiding serpent has made it his retreat; let
them explore their dwelling, and then fence
it. The forest yields its pliant twigs, and the
trees their wattling branches, and thus they
compose a habitation.
Increasing posterity increases strength, and
mutual asiistance procures additional conveni-
ences ; till, by degrees, the father of the family
becomes founder of a town, and eredls the
standarcls of his dwelling: not now from the
fir st branches which offer, but he seledts the
straiteft