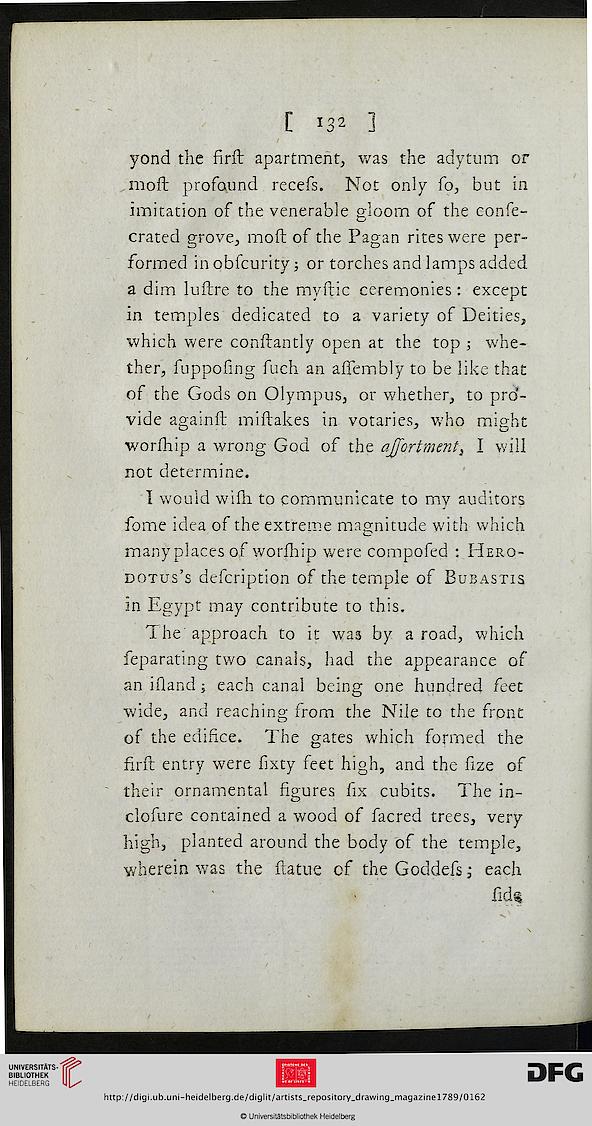 Information about OCR text
[ 132 J
yond the first apartment, was the adytum or
moil profound recess. Not only so, but in
imitation of the venerable gloom of the conse-
crated grove, mod of the Pagan rites were per-
formed in obscurity j or torches and lamps added
a dim lustre to the mystic ceremonies: except
in temples dedicated to a variety of Deities,
which were constantly open at the top ; whe-
ther, supposmg such an assembly to be like that
os the Gods on Olympus, or whether, to pro*-
vide against mistakes in votaries, who might
worship a wrong God of the ajfortment, I will
not determine.
1 would wish to communicate to my auditors
some idea of the extreme magnitude with which
many places os worship were composed : Hero-
dotus’s description of the temple of Bubastis
in Egypt may contribute to this.
The approach to it was by a road, which
separating two canals, had the appearance of
an issand; each canal being one hundred feet
wide, and reaching from the Nile to the front
of the edifice. The gates which formed the
fir st entry were sixty feet high, and the size of
their ornamental figures six cubits. The in-
closure contained a wood of sacred trees, very
high, planted around the body of the temple,
wherein was the statue cf the Gcddess; each
sids