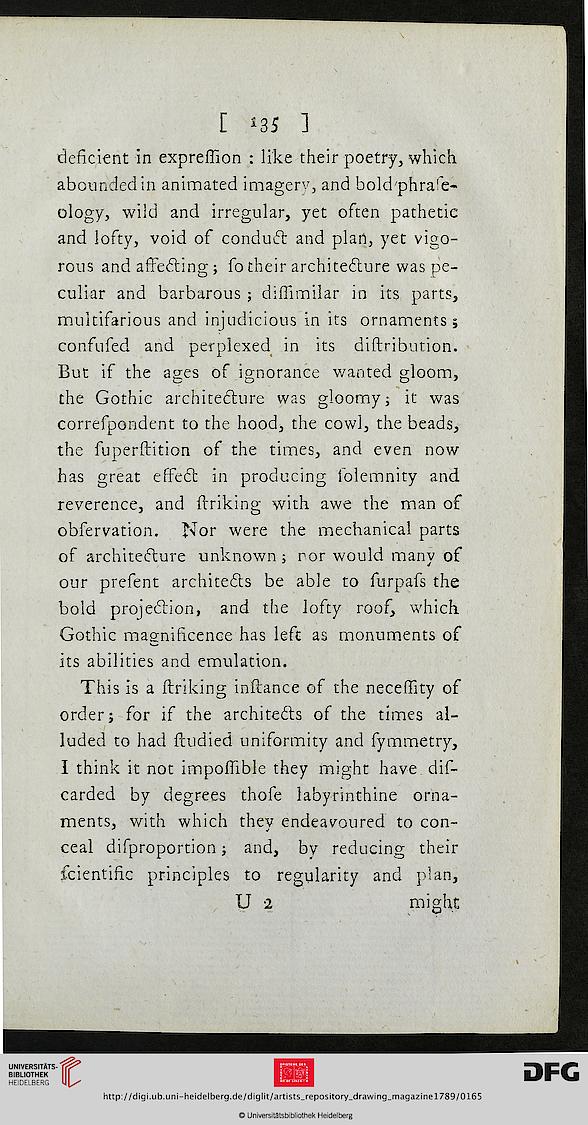 Information about OCR text
[ s35 ]
deficient in expression : like their poetry, which
abounded in animated imagery, and bold phrase-
ology, wild and irregular, yet often pathetic
and lofty, void of conduct and plan, yet vigo-
rous and affedting ; so their architecture was pe-
culiar and barbarous ; dissimilar in its parts,
multifarious and injudicious in its ornaments;
confused and perplexed in its distribution.
But if the ages of ignorance wanted gloom,
the Gothic architecture was gloomy; it was
correspondent to the hood, the cowl, the beads,
the superstition of the times, and even now
has great effedt in producing solemnity and
reverence, and striking with awe the man os
observation. Nor were the mechanical parts
of architedlure unknown ; ror would many of
our present architedts be able to surpass the
bold projection, and the lofty roos, which
Gothic magnificence has left as monuments of
its abilities and emulation.
This is a slriking inilance of the necessity of
order; for if the architedts of the times al-
luded to had scudied uniformity and symmetry,
I think it not impossible they might have dis-
carded by degrees those labyrinthine orna-
ments, with which they endeavoured to con-
ceal disproportion; and, by reducing their
scientific principles to regularity and plan,
U 2 might