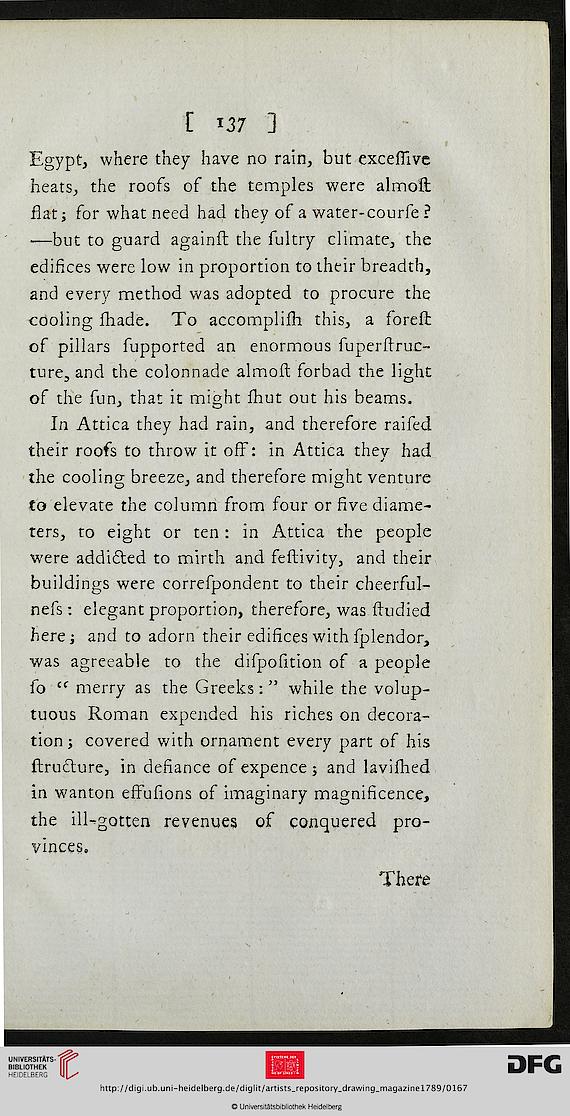 Information about OCR text
[ *37 ]
Egypt, where they have no rain, but excessive
heats, the roofs of the temples were almost
siat; for what need had they of a water-course ?
—but to guard against the sultry climate, the
edifices were low in proportion to their breadth,
and every method was adopted to procure the
cooling sihade. To accomplish this, a forest
of pillars supported an enormous superstruc-
ture, and the colonnade almost forbad the light
of the sun, that it might shut out his beams.
In Attica they had rain, and therefore raised
their roofs to throw it off: in Attica thev had
the cooling breeze, and therefore might venture
to elevate the column from four or five diame-
ters, to eight or ten: in Attica the people
were addi&ed to mirth and festivity, and their
buildings were correspondent to their cheerful-
ness : elegant proportion, therefore, was studied
here; and to adorn their edifices with splendor,
was agreeable to the disposition os a people
so “ merry as the Greeks:” while the volup-
tuous Roman expended his riches on decora-
tion ; covered with ornament every part of his
structure, in defiance of expence ; and lavished
in wanton effusions of imaginary magnificence,
the ill-gotten revenues of conquered pro-
vinces.