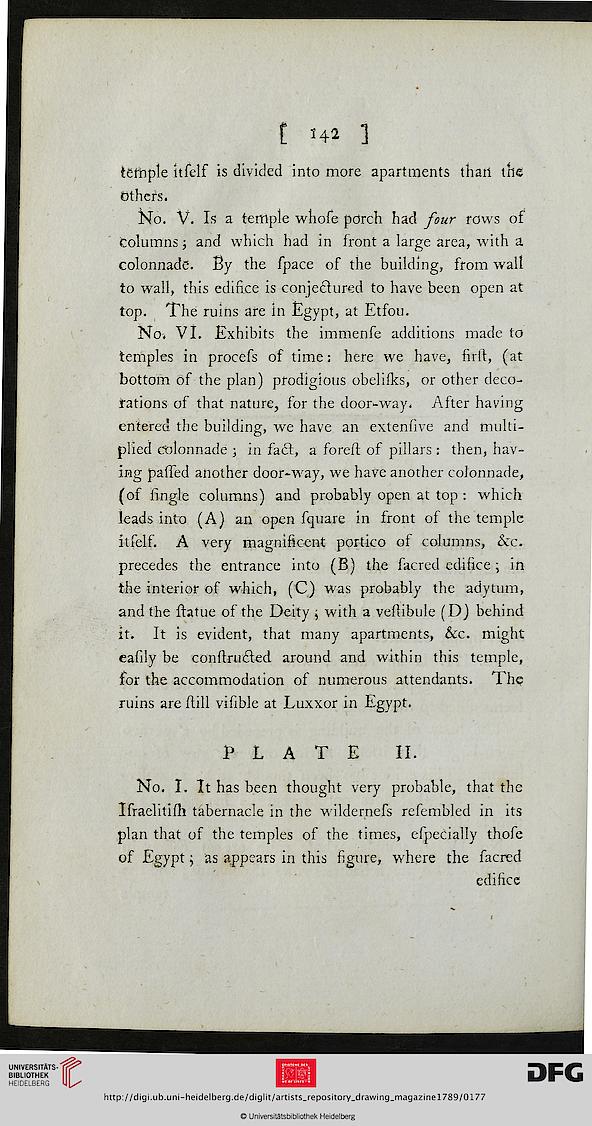 Information about OCR text
t Hi ]
temple itself is divided into more apartments than the
Others.
No. V. Is a temple whole porch had four rows os
Columns; and which had in front a large area, with a
colonnade. By the space of the building, from wall
to wall, this edisice is conjectured to have been open at
top. The ruins are in Egypt, at Etfou.
No. VI. Exhibits the immense additions made to
temples in process of time; here we have, firil, (at
bottom of the plan) prodigious obelilks, or other deco-
rations of that nature, for the door-w'ay. After having
entered the building, we have an extensive and multi-
plied colonnade ; in fact, a forest of pillars : then, hav-
ing pa(Ted another door-way, we have another colonnade,
(of Engle columns) and probably open at top : which
leads into (A) an open square in front of the temple
itself. A very magnificent portico of columns, &c.
precedes the entrance into (B) the sacred edifice; in
the interior of which, (C) was probably the adytum,
and the statue of the Deity ; with a veslibule (D) behind
it. It is evident, that many apartments, &c. might
easily be construdted around and within this temple,
for the accommodation of numerous attendants. The
ruins are dill visible at Luxxor in Egypt.
PLATE II.
No. I. It has been thought very probable, that the
Israelitilh tabernacle in the wilderness resembled in its
plan that of the temples of the times, especially those
of Egypt; as appears in this figure, where the sacred
edifice