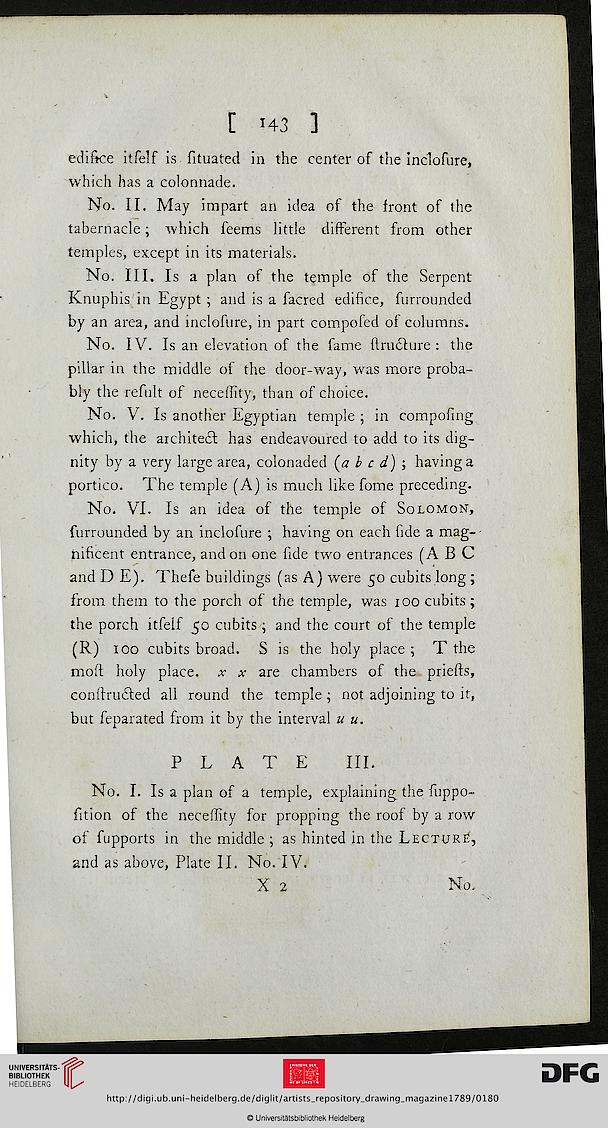 Information about OCR text
[ >43 ]
edifice itself is situated in the center of the inclosure,
which has a colonnade.
No. II. May impart an idea os the front of the
tabernacle; which seems little different from other
temples, except in its materials.
No. III. Is a plan of the temple of the Serpent
Knuphis in Egypt ; and is a sacred edifice, surrounded
by an area, and inclosure, in part composed of columns.
No. IV. Is an elevation of the same strudlure : the
pillar in the middle os the door-way, was more proba-
bly the result of necellity, than of choice.
No. V. Is another Egyptian temple ; in composing
which, the architect has endeavoured to add to its dig-
nity by a very large area, colonaded (abed) ; having a
portico. The temple (A) is much like some preceding.
No. VI. Is an idea os the temple of Solomon,
surrounded by an inclosure ; having on each side a mag-
nificent entrance, and on one side two entrances (A B C
and D E). These buildings (as A) were 50 cubits long;
srom them to the porch of the temple, was 100 cubits ;
the porch itself 50 cubits; and the court of the temple
(R) 100 cubits broad. S is the holy place ; T the
mold holy place, x x are chambers of the priests,
construdted all round the temple ; not adjoining to it,
but separated from it by the interval u u.
PLATE III.
No. I. Is a plan of a temple, explaining the suppo-
sition of the necessity for propping the roof by a row
of supports in the middle ; as hinted in the Lecture^
and as above, Plate II. No. IV.
X 2