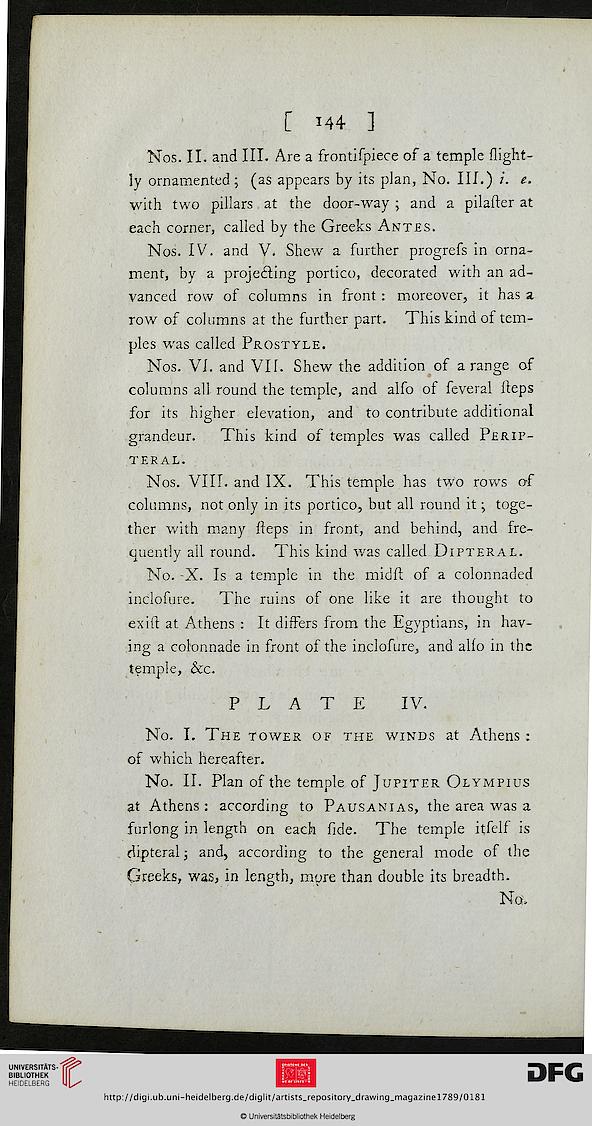 Information about OCR text
[ M4 ]
Nos. II. and III. Are a frontispiece of a temple slight-
ly ornamented; (as appears by its plan, No. III.) i. e.
with two pillars at the door-way ; and a pilaster at
each corner, called by the Greeks Antes.
Nos. IV. and V. Shew a further progress in orna-
ment, by a projecting portico, decorated with an ad-
vanced row of columns in front : moreover, it has a
row of columns at the further part. This kind of tem-
ples was called Prostyle.
Nos. VI. and VII. Shew the addition of a range of
columns all round the temple, and also of several Heps
for its higher elevation, and to contribute additional
grandeur. This kind of temples was called Perip-
teral.
Nos. VIII. and IX. This temple has two rows of
columns, not only in its portico, but all round it; toge-
ther with many Heps in front, and behind, and fre-
quently all round. This kind was called Dipteral.
No. -X. Is a temple in the midsl os a colonnaded
inclosure. The ruins of one like it are thought to
exit! at Athens : It differs from the Egyptians, in hav-
ing a colonnade in front of the inclosure, and alio in the
temple, &c.
PLATE IV.
No. I. The tower of the winds at Athens :
of which hereafter.
No. II. Plan of the temple os Jupiter Olympius
at Athens: according to Pausanias, the area was a
surlong in length on each side. The temple itself is
dipteral; and, according to the general mode of the
Greeks, was, in length, more than double its breadth.
Not.