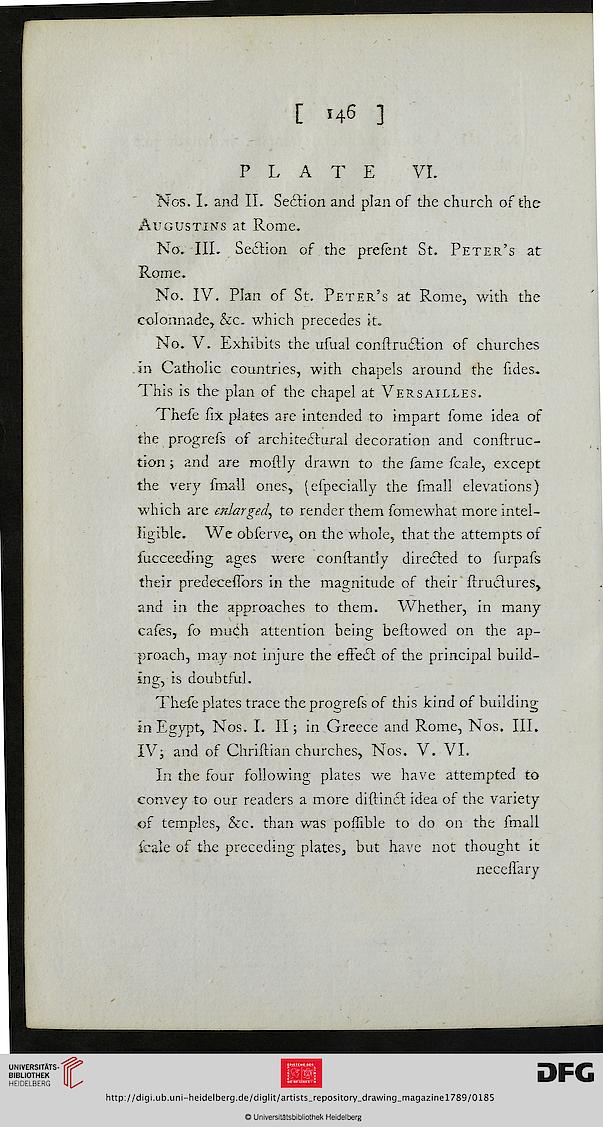 PLATE VI.
Nos. I. and II. Section and plan of the church of the
Augustins at Rome.
No. III. Sedtion of the present St. Peter’s at
Rome.
No. IV. Plan of St. Peter’s at Rome, with the
colonnade, &c. which precedes it.
No. V. Exhibits the ufual construdtion of churches
in Catholic countries, with chapels around the Tides.
This is the plan of the chapel at Versailles.
These six plates are intended to impart some idea of
the progress of architectural decoration and construc-
tion ; and are mostly drawn to the same scale, except
the very small ones, (especially the small elevations)
which are enlarged', to render them somewhat more intel-
ligible. We observe, on the whole, that the attempts os
iucceeding ages were constantly directed to surpass
their predecesiors in the magnitude of their struclures,
and in the approaches to them. Whether, in many
cases, so much attention being bellowed on the ap-
proach, may not injure the effect of the principal build-
ing, is doubtful,
These plates trace the progress of this kind of building
in Egypt, Nos. I. II; in Greece and Rome, Nos. III.
IV; and of Christian churches, Nos. V. VI.
In the four following plates we have attempted to
convey to our readers a more distinct idea of the variety
os temples, &c. than was possible to do on the small
icale of the preceding plates, but have not thought it
necessary