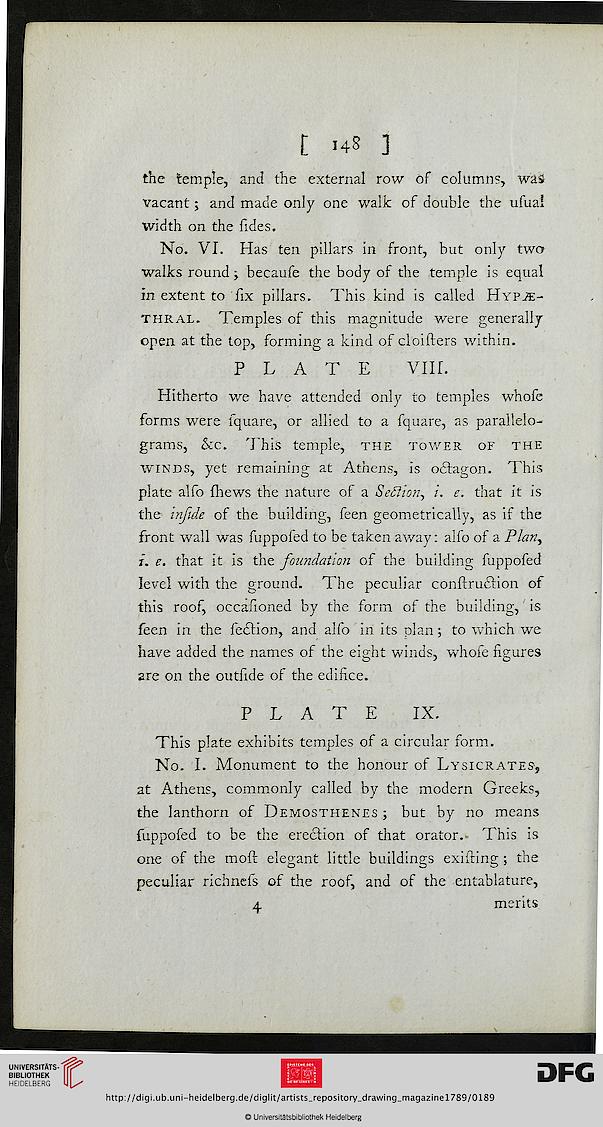 Information about OCR text
t 148 ]
the temple, and the external row os columns, was
vacant; and made only one walk of double the usual
width on the Tides.
No. VI. Has ten pillars in front, but only two
walks round; because the body of the temple is equal
in extent to six pillars. This kind is called HypjE-
thral. Temples of this magnitude were generally
open at the top, forming a kind of cloisters within.
PLATE VIIL
Hitherto we have attended only to temples whose
forms were lquare, or allied to a square, as parallelo-
grams, &c. This temple, the tower of the
winds, yet remaining at Athens, is odbigon. This
plate also (hews the nature of a Section, i. e. that it is
the infide of the building, seen geometrically, as if the
sront wall was supposed to be taken away: also of a Plan
j. e. that it is the foundation of the building supposed
level with the ground. The peculiar construftion of
this roof, occasioned by the form of the building, is
seen in the sedlion, and also in its plan; to which we
have added the names of the eight winds, whose figures
2re on the outside of the edifice.
PLATE IX.
This plate exhibits temples of a circular form.
No. I. Monument to the honour of Lysicrates,
at Athens, commonly called by the modern Greeks,
the lanthorn of Demosthenes ; but by no means
supposed to be the ereHion of that orator.- This is
one of the most elegant little buildings existing ; the
peculiar richnels of the roof, and of the entablature,
4. merits