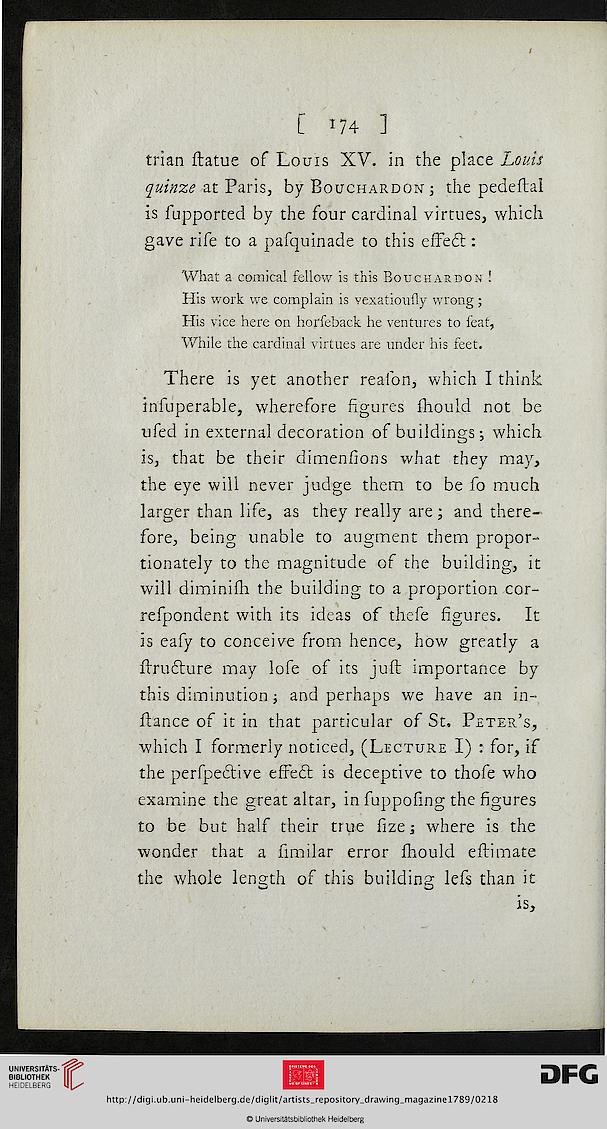 L U4 ]
trian statue of Louis XV. in the place Louis
quinze at Paris, by Bouchardon; the pedestal
is supported by the four cardinal virtues, which
gave rise to a pasquinade to this esFe<ft:
What a comical fellow is this Bouchardon !
His work we complain is vexatioussy wrong;
His vice here on horseback he ventures to seat,
While the cardinal virtues are under his seet.
There is yet another reason, which I think
insuperable, wherefore figures should not be
used in external decoration of buildings; which
is, that be their dimensions what they may,
the eye will never judge them to be so much
larger than life, as they really are; and there-
fore, being unable to augment them propor-
tionately to the magnitude of the building, it
will diminish the building to a proportion cor-
respondent with its ideas of these figures. It
is easy to conceive from hence, how greatly a
strudture may lose of its just importance by
this diminution; and perhaps we have an in-
stance of it in that particular of St. Peter’s,
which I formerly noticed, (Lecture I) : for, if
the perspective effedl is deceptive to those who
examine the great altar, in supposing the figures
to be but hals their true size; where is the
wonder that a similar error should estimate
the whole length of this building less than it
is.