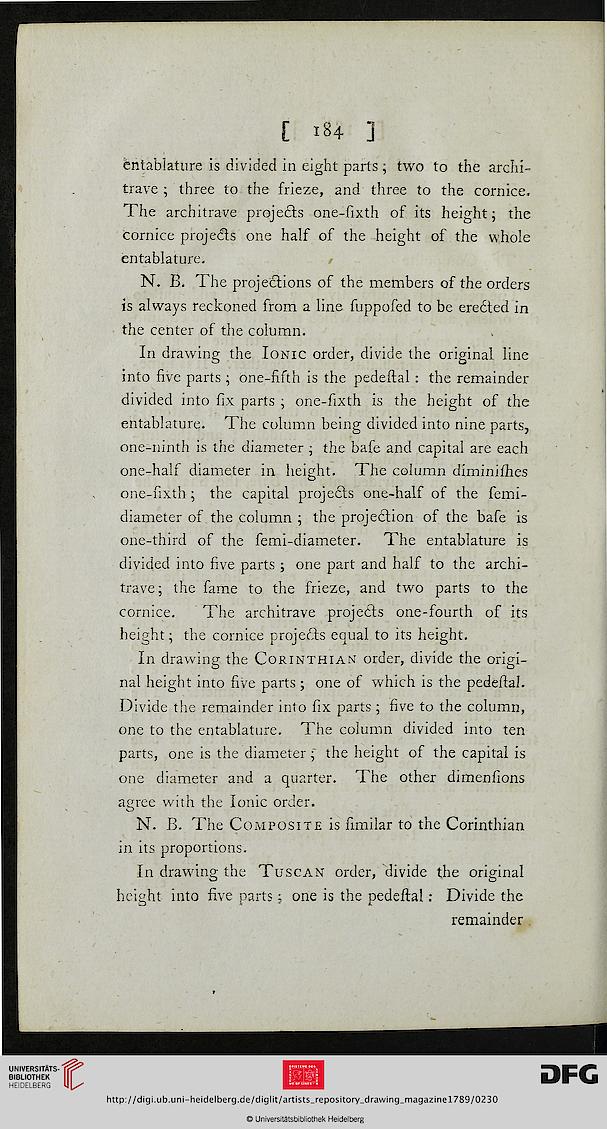 Information about OCR text
E 184 ]
entablature is divided in eight parts; two to the archi-
trave ; three to the frieze, and three to the cornice.
The architrave projects one-sixth of its height; the
cornice projects one half of the height of the whole
entablature.
N. B. The projections of the members of the orders
is always reckoned from a line supposed to be eredted in
the center of the column.
In drawing the Ionic order, divide the original line
into five parts ; one-fisth is the pedestal: the remainder
divided into six parts ; one-sixth is the height of the
entablature. The column being divided into nine parts,
one-ninth is the diameter ; the base and capital are each
one-half diameter in height. The column diminishes
one-sixth ; the capital projedls one-half of the semi-
diameter os the column ; the projection of the base is
one-third of the semi-diameter. The entablature is
divided into five parts ; one part and half to the archi-
trave; the same to the frieze, and two parts to the
cornice. The architrave projects one-fourth of its
height; the cornice projects equal to its height.
In drawing the Corinthian order, divide the origi-
nal height into five parts; one of which is the pedestal.
Divide the remainder into six parts; five to the column,
one to the entablature. The column divided into ten
parts, one is the diameter ; the height of the capital is
one diameter and a quarter. The other dimensions
agree with the Ionic order.
N. B. The Composite is similar to the Corinthian
in its proportions.
In drawing the Tuscan order, divide the original
height into five parts; one is the pedestal: Divide the
remainder