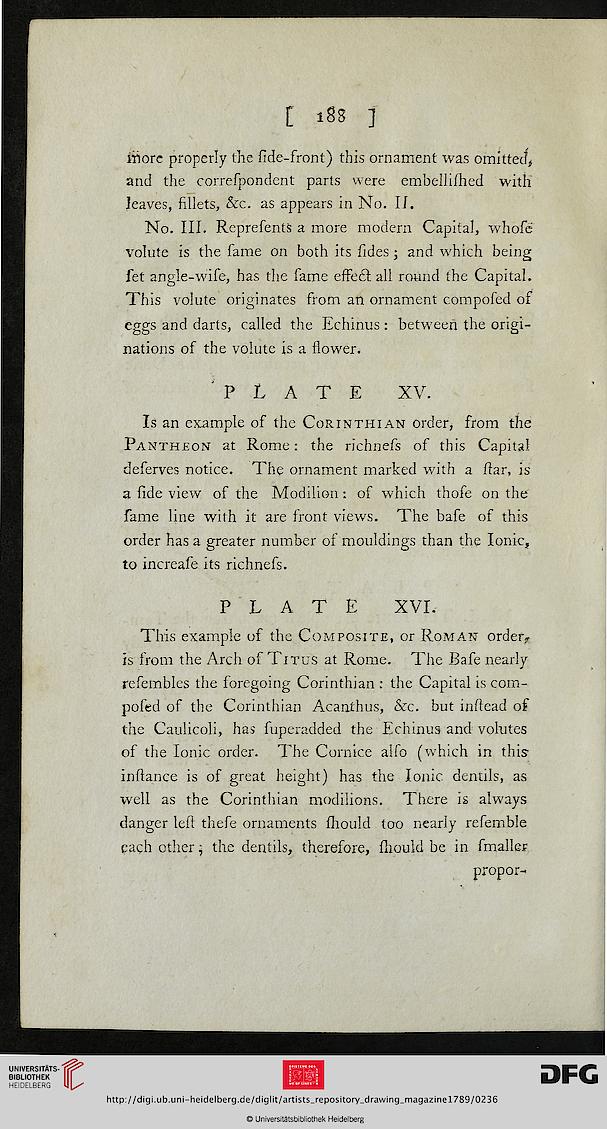 Information about OCR text
[ i8s ]
more properly the side-front) this ornament was omitted*
and the correspondent parts were embellished with
leaves, fillets, &c. as appears in No. Is.
No. III. Represents a more modern Capital, wrhose
volute is the same on both its Tides; and which being
set angle-wise, has the same effedt all round the Capital.
This volute originates from an ornament composed os
eggs and darts, called the Echinus : between the origi-
nations of the volute is a ssower.
PLATE XV.
Is an example of the Corinthian order, from the
Pantheon at Rome: the richness of this Capital
deserves notice. The ornament marked with a flar, is
a side view of the Modilion: of which those on the
same line with it are front views. The base of this
order has a greater number of mouldings than the Ionic,
to increase its richness.
PLATE XVI.
This example of the Composite, or Roman order*
is from the Arch of Titus at Rome. The Base nearly
resembles the soregoing Corinthian : the Capital is com-
posed of the Corinthian Acanthus, &c. but instead os
the Caulicoli, has superadded the Echinus and volutes
of the Ionic order. The Cornice also (which in this
instance is of great height) has the Ionic dentils, as
well as the Corinthian modilions. There is always
danger lefi these ornaments should too nearly reserable
each other; the dentils, therefore, should be in smaller
propor-