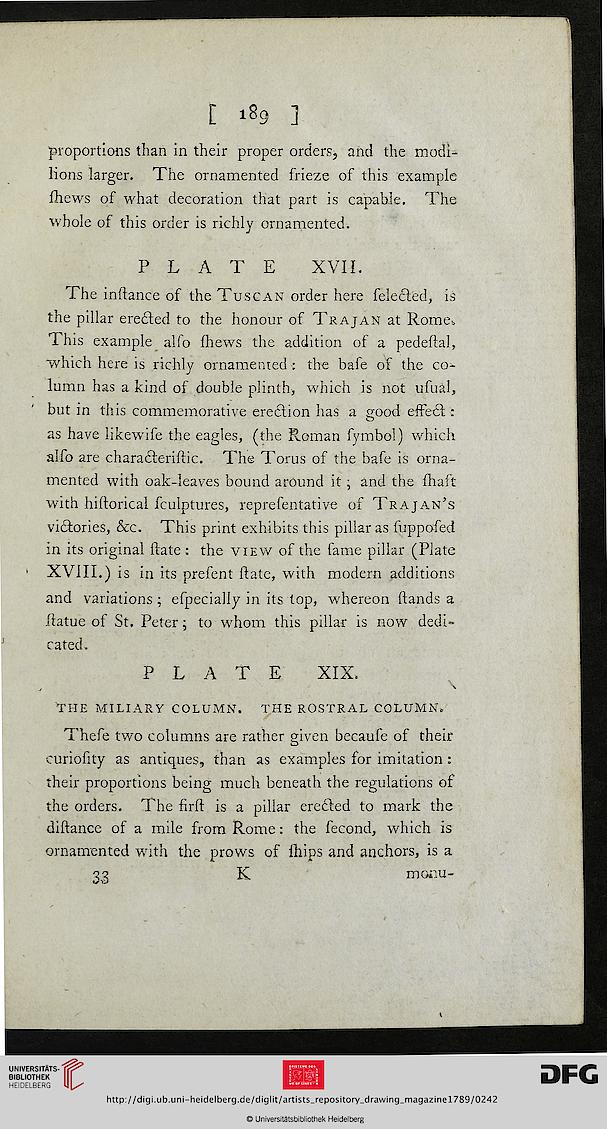 Information about OCR text
[ »89 ]
proportions than in their proper orders, and the modi-
lions larger. The ornamented frieze of this example
shews of what decoration that part is capable. The
whole of this order is richly ornamented.
PLATE XVII.
The instance of the Tuscan order here selecled, is
the pillar erected to the honour of Trajan at Rome*
This example also shews the addition of a pedestal,
which here is richly ornamented : the base os the co-
lumn has a kind os double plinth, which is not usual,
but in this commemorative erection has a good effedl:
as have likewise the eagles, (the Roman symbol) which
also are characleristic. The Torus of the base is orna-
mented with oak-leaves bound around it; and the {hast
with historical sculptures, representative os Trajan’s
vidlories, &c. This print exhibits this pillar as supposed
in its original state: the view of the same pillar (Plate
• XVIII.) is in its present state, with modern additions
and variations; especially in its top, whereon (lands a
statue of St. Peter; to whom this pillar is now dedi**
rated,
PLATE XIX.
, \
h’EIE MILIARY COLUMN. THE ROSTRAL COLUMN.
These two columns are rather given because of their
euriosity as antiques, than as examples for imitation :
their proportions being much beneath the regulations of
the orders. The first is a pillar erecfed to mark the
distance os a mile from Rome : the second, which is
ornamented with the prows os ships and anchors, is a
33 K menu-