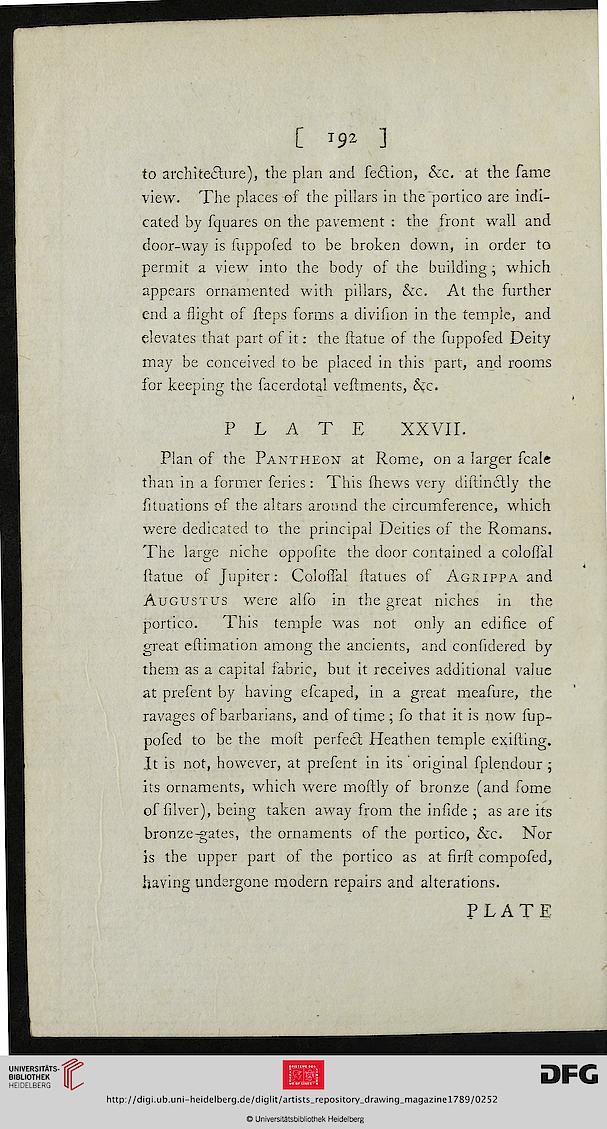 Information about OCR text
[ x92 ]
to architecture), the plan and seclion, &c. at the same
view. The places of the pillars in the portico are indi-
cated by squares on the pavement : the front wall and
door-way is supposed to be broken down, in order to
permit a view into the body of the building ; which
appears ornamented with pillars, &c. At the further
end a flight of steps sorms a division in the temple, and
elevates that part of it: the slatue of the supposed Deity
may be conceived to be placed in this part, and rooms
sor keeping the sacerdotal vestments, &c.
PLATE XXVII.
Plan of the Pantheon at Rome, on a larger scale
than in a former series: This thews very diftinclly the
situations of the altars around the circumference, which
were dedicated to the principal Deities os the Romans.
The large niche opposite the door contained a colossal
statue of Jupiter: Colosfal slatues os Agrippa and
Augustus were also in the great niches in the
portico. This temple was not only an edifice of
great estimation among the ancients, and considered by
them as a capital sabric, but it receives additional value
at present by having escaped, in a great measure, the
ravages of barbarians, and of time ; so that it is now sup-
posed to be the moil perfect Heathen temple existing.
It is not, however, at present in its original splendour ;
its ornaments, which were mostly of bronze (and some
os sdver), being taken away from the inside ; as are its
bronze-gates, the ornaments of the portico, &c. Nor
is the upper part of the portico as at first composed,
having undergone modern repairs and alterations.
PLATE