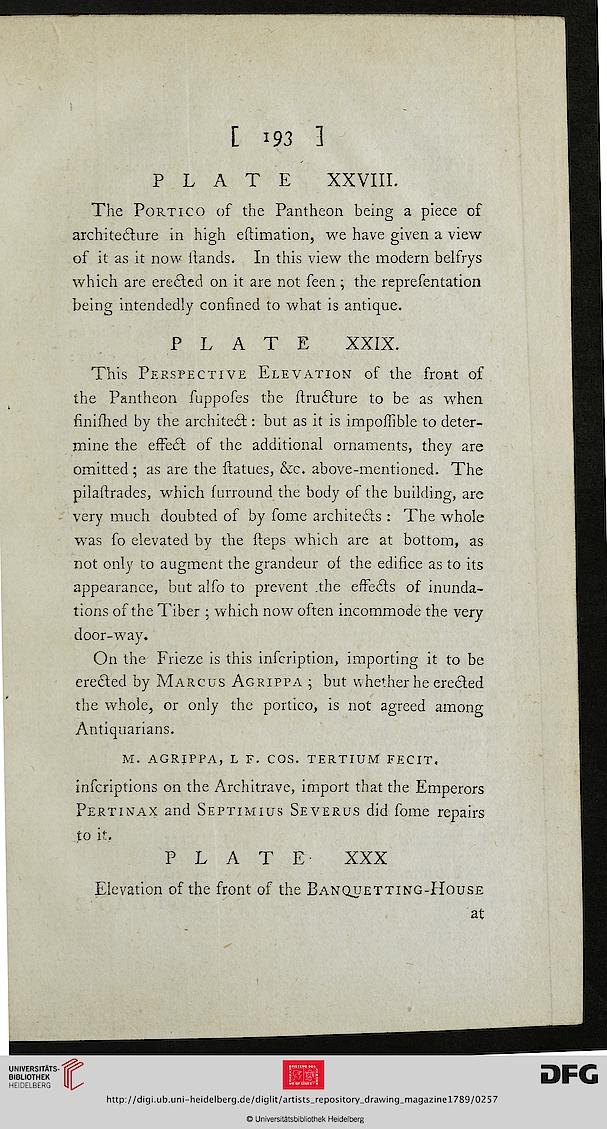 Information about OCR text
[ 193 ]
PLATE XXVIII.
The Portico of the Pantheon being a piece os
architecture in high estimation, we have given a view
of it as it now Hands. In this view the modern belsrys
which are erected on it are not seen ; the representation
being intendedly confined to what is antique.
PLATE XXIX.
This Perspective Elevation of the front os
the Pantheon supposes the structure to be as wshen
finished by the architect: but as it is impossible to deter-
mine the effect of the additional ornaments, they are
omitted ; as are the statues, &c. above-mentioned. The
piiaifrades, which surround the body of the building, are
very much doubted os by some architects: The whole
was so elevated by the sfeps which are at bottom, as
not only to augment the grandeur of the edifice as to its
appearance, but also to prevent .the effects of inunda-
tions os the Tiber ; which now often incommode the very
door-way.
On the Frieze is this inscription, importing it to be
erected by Marcus Agrippa ; but whether he erected
the whole, or only the portico, is not agreed among
Antiquarians.
m. agrippa, l s. cos. tertium fecit.
inscriptions on the Architrave, import that the Emperors
Pertinax and Septimius Severus did some repairs
to it.
PLATE XXX
Elevation of the front of the Banquetting-House
at