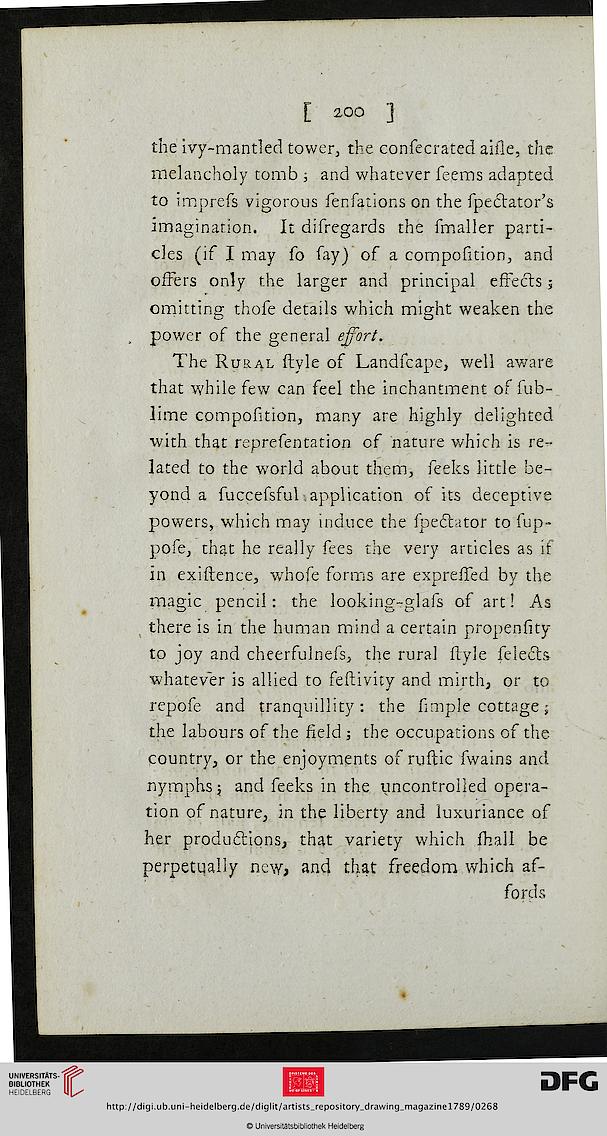 Information about OCR text
[ 200 ]
the ivy-mantled tower, the consecrated aide, the
melancholy tomb ; and whatever seems adapted
to impress vigorous sensations on the spectator’s
imagination. It disregards the smaller parti-
cles (if I may so say) of a composition, and
offers only the larger and principal effects
omitting those details v/hich might weaken the
power of the general effort.
The Rural stvle of Landscape, well aware
that while few can feel the inchantment of sub-
lime composition, many are highly delighted
with that representation of nature which is re-
lated to the world about them, sesks little be-
yond a successful application of its deceptive
powers, which may induce the spedlator to sup-
pose, that he really sees the very articles as if
in existence, wdnose forms are expressed by the
magic pencil: the looking-glass of art! As
there is in the human mind a certain propensity
to joy and cheersulness, the rural style selects
whatever is allied to festivity and mirth, or to
repose and tranquillity: the dimple cottage 5
the labours of the field] the occupations of the
country, or the enjoyments os rustic swains and
nymphs; and seeks in the uncontrolled opera-
tion of nature, in the liberty and luxuriance of
her productions, that variety which shall be
perpetually new, and that freedom which af-
fords