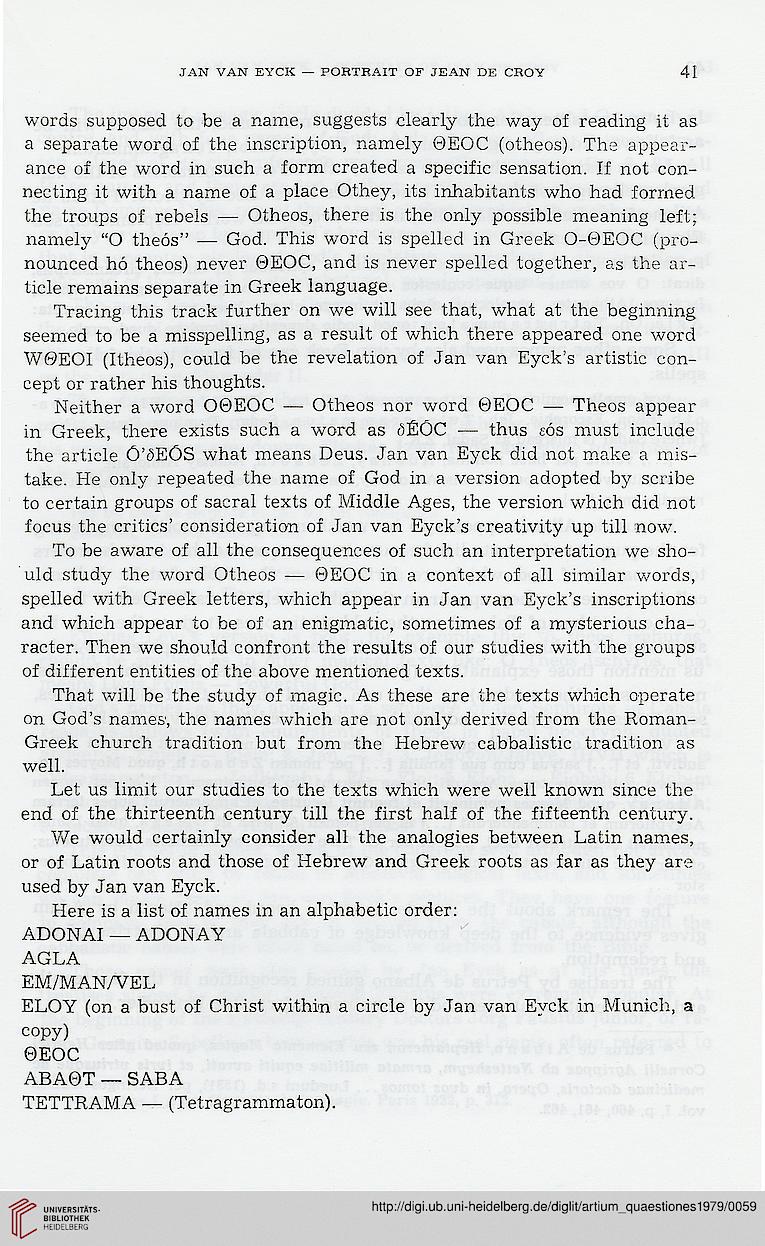 woras supposed to be a name, suggests clearly the way of reading it as
a separate word of the inscription, namely 0EOC (otheos). The appear-
ance of the word in such a form created a specifie sensation. If not con-
necting it with a name of a place Othey, its inhabitants who had forrned
the troups of rebels — Otheos, there is the only possible meaning left;
namely “O theós” — God. This word is spelled in Greek O-0EOC (pro-
nounced hó theos) never 0EOC, and is never spelled together, as the ar-
ticle remains separate in Greek language.

Tracing this track further on we will see that, what at the beginning
seemed to be a misspelling, as a result of which there appeared one word
W0EOI (Itheos), could be the revelation of Jan van Eyck’s artistic con-
cept or rather his thoughts.

Neither a word O0EOC — Otheos nor word 0EOC — Theos appear
in Greek, there exists such a word as óEÓC •— thus £Ós must include
the article Ó’<5EÓS what means Deus. Jan van Eyck did not make a mis-
take. He only repeated the name of God in a version adopted by scribe
to certain groups of sacral texts of Middle Ages, the version which did not
focus the critics’ consideration of Jan van Eyck’s creativity up till now.

To be aware of all the conseąuences of such an interpretation we sho-
uld study the word Otheos — 0EOC in a context of all similar words,
spelled with Greek letters, which appear in Jan van Eyck’s inscriptions
and which appear to be of an enigmatic, sometimes of a mysterious cha-
racter. Then we should confront the results of our studies with the groups
of different entities of the above mentioned texts.

That will be the study of magie. As these are the texts which operate
on God’s names, the names which are not only derived from the Roman-
Greek church tradition but from the Hebrew cabbalistic tradition as
well.

Let us limit our studies to the texts which were well known sińce the
end of the thirteenth eentury till the first half of the fifteenth century.

We would certainly consider all the analogies between Latin names,
or of Latin roots and those of Hebrew and Greek roats as far as they are
used by Jan van Eyck.

Here is a list of names in an alphabetic order:

ELOY (on a bust of Christ within a circle by Jan van Eyck in Munich, a
copy)