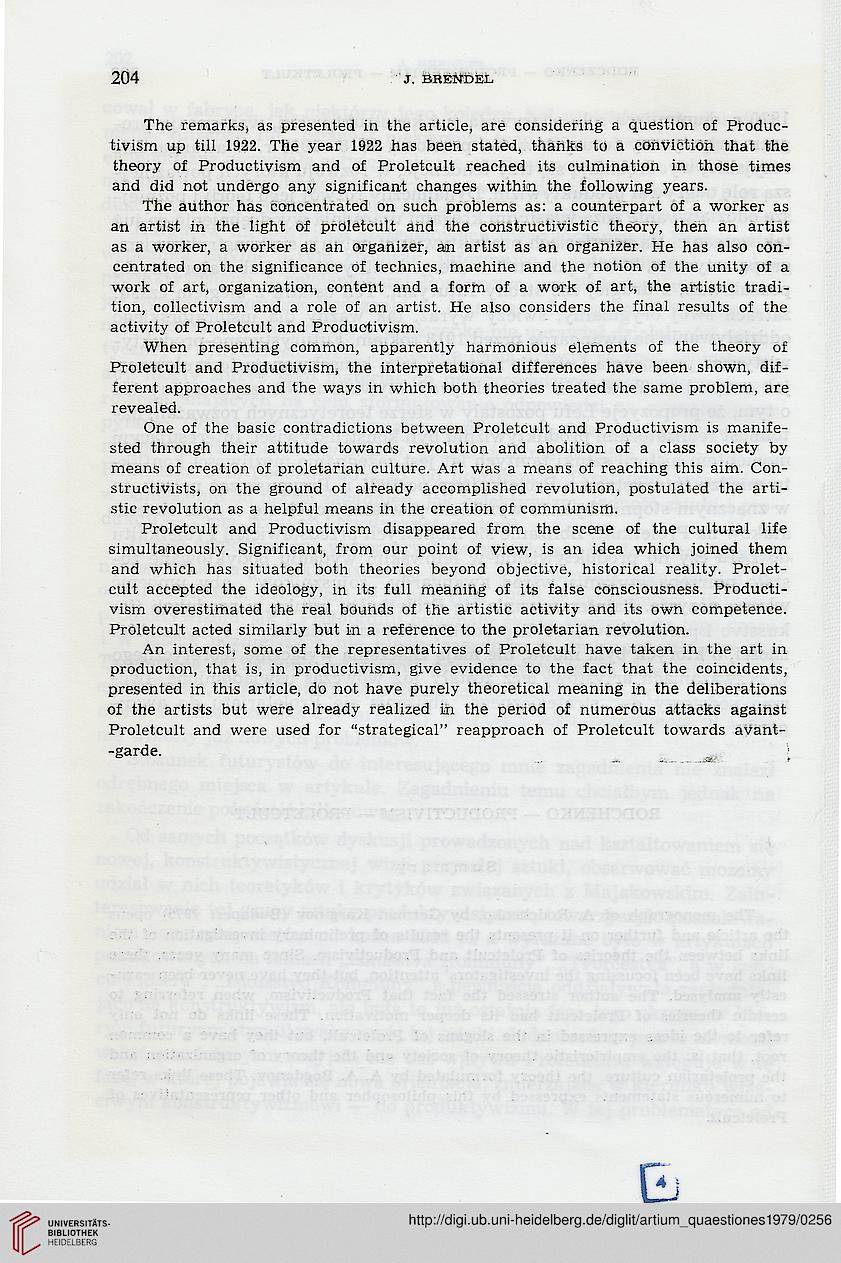 The remarks, as presented in the article, are considerińg a question of Produc-
tivism up till 1922. The year 1922 has been stated, thahks to a conviction that the
theory of Productivism and of Proletcult reached its culmination in those times
and did not undergo any significant changes withim the following years.

The author has concentrated on such problems as: a counterpart of a worker as
an artist in the light of proletcult and the constructivistic theory, then an artist
as a worker, a worker as an organizer, an artist as an organizer. He has also con-
centrated on the significance of technics, machinę and the notion of the unity of a
work of art, organization, content and a form of a work of art, the artistic tradi-
tion, collectivism and a role of an artist. He also considers the finał results of the
activity of Proletcult and Productivism.

When presenting common, apparently harmonious elements of the theory of
Proletcult and Productivism, the interpretational differences have been shown, dif-
ferent approaches and the ways in which both theories treated the same problem, are
revealed.

One of the basie contradictions between Proletcult and Productivism is manife-
sted through their attitude towards revolution and abolition of a class society by
means of creation of proletarian culture. Art was a means of reaching this aim. Con-
structivists, on the ground of already accomplished revolution, postulated the arti-
stic revolution as a helpful means in the creation of communism.

Proletcult and Productivism disappeared from the scene of the cultural life
simultaneously. Significant, from our point of view, is an idea which joined them
and which has situated both theories beyond objective, historical reality. Prolet-
cult accepted the ideology, in its fuli meanihg of its false consciousness. Producti-
vism overestimated the real bóunds of the artistic activity and its own competence.
Proletcult acted similarly but in a reference to the proletarian revolution.

An interest, some of the representatives of Proletcult have taken in the art in
production, that is, in productivism, give evidence to the fact that the coincidents,
presented in this article, do not have purely theoretical meaning in the deliberations
of the artists but were already realized in the period of numerous attacks against
Proletcult and were used for “strategical” reapproach of Proletcult towards avant-
-garde. ;