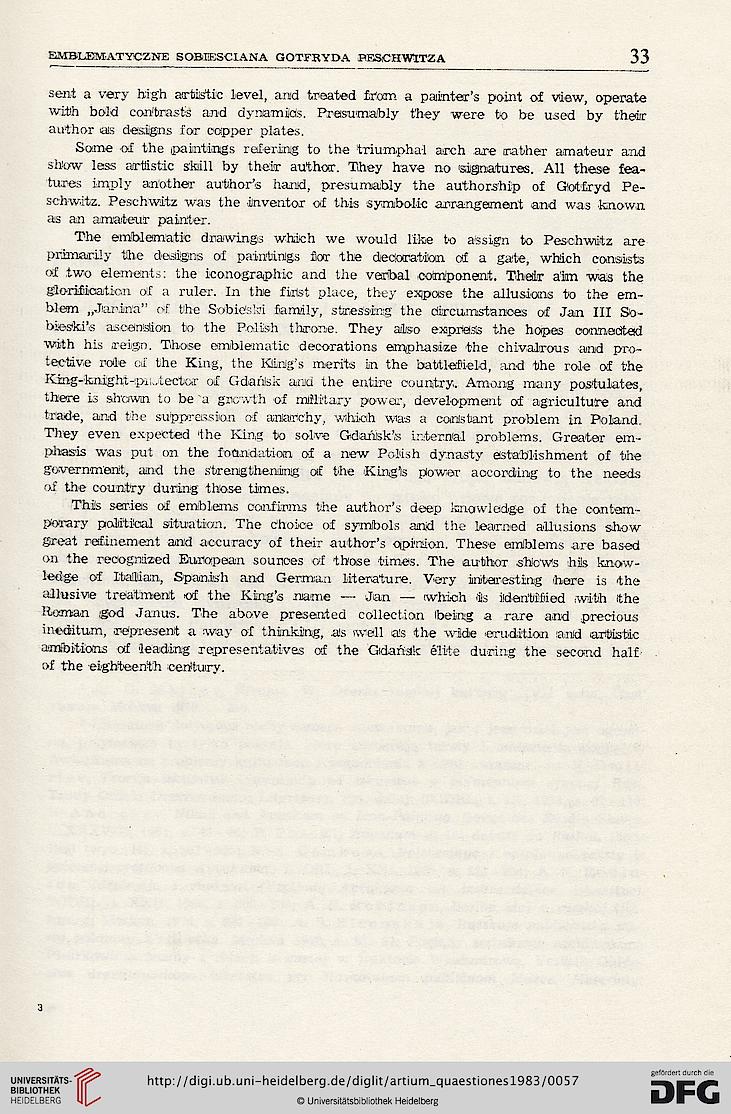 sent a very high artistic level, and treated from a pointeir’s point of view, operate
with bold contrasts and dynamics, Presumably they were to be used by their
author ais designs for copper plates.
Some of the paintings refer,ing to the triumphal arch are rather amateur and
show less artistic skill by their author. They have no (signatures. All these fea-
tures imply another author’s haad, presumably the authorship of Gotfryd Pe-
schwitz. Peschwitz was the inventor of this symbolic arrangement and was known
as an amateur painter.
The emblematic drawings which we would like to assign to Pesch wit z are
primarily the designs of paintings for the decoration, otf a gate, which consists
of two elements: the iconographie and the verbal component. Their aim -was the
glorification otf a ruler. In the first place, they expose the allusions to the em-
blem „Jiarin'a” of the Sobieski family, stressing the circumstances of Jan III So-
bieski’« ascension to the Polish throne. They ateo express the hopes connected
with his reign. Those emblematic decorations emphasize the chivalrous and pro-
tective role of the King, the King’s merits in the battlefield, and the role of the
King-kaiight-pii-itectcr of Gdańlsk arid the entire country,. Among many postulates,
there is shown to be a growth of military' power, development of agriculture and
trade, and the suppression of anarchy, which was a comlstant problem in Poland,
They even expected the King to solve Gdansk’s internal problems. Greater em-
phasis was put on the foundation of a new Polish dynasty establishment of the
government, and the strengthening of the King's power according to the needs
otf the country during those times.
This series otf emblems confirms the author’s deep knowledge of the contem-
porary political situation. The choice of symbols and the learned allusions show
gireat refinement and accuracy of their author’s opinion. These emblems are based
on the recognized European sources of those times. The author .shows his know-
ledge of Italian, Spanish and German literature. Very interesting here is the
allusive treat nient of the Kimg’is name — Jan — which is identified with the
Roman god Janus. The above presented collection being a rare and precious
ineditum, represent a way of thinking, als well als the wide 'erudition and artistic
ambitions of leading representatives of the Gdańsk élite during the second half
of the eighteenth century.