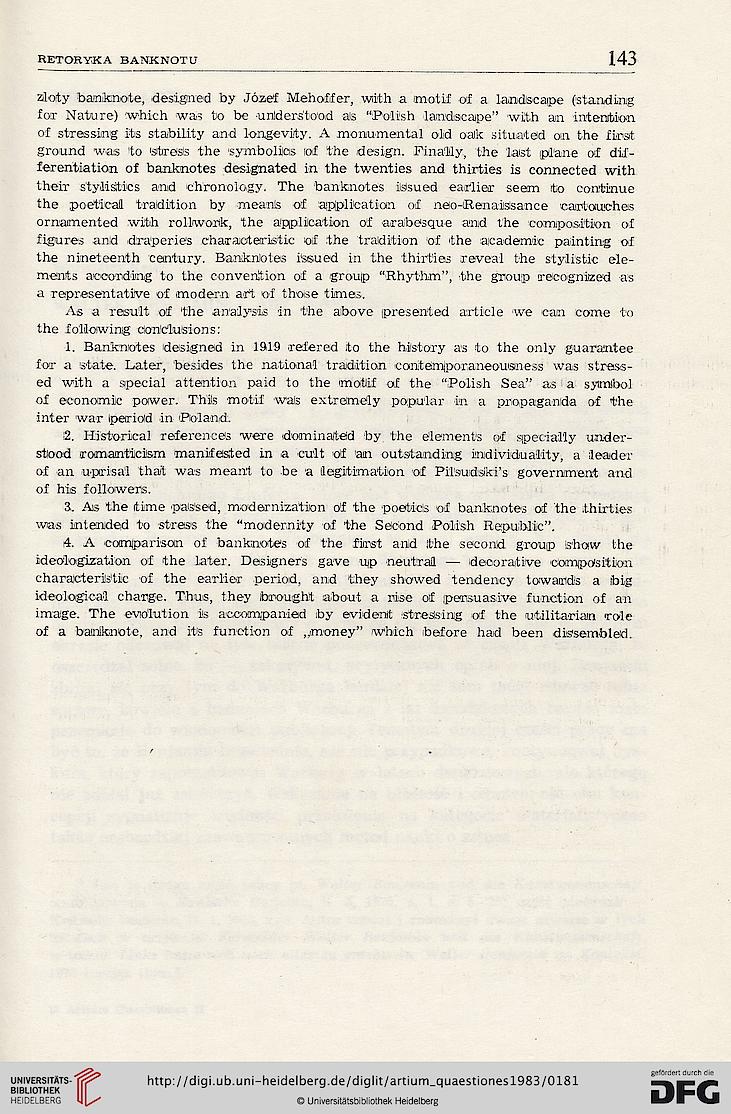 zloty banknote, designed by Józef Mehoffer, with a motif of a landscape ('standing
fox Nature) which wa.3 to be understood als “Polish landscape” with an -intention
of stressing its stability and longevity. A .monumental old oalk situated oin the first
ground was to Stiraste the symbolics lof the design. Finally, the last piane of dif-
ferentiation of banknotes designated in the twenties and thirties is connected with
their stylistics and 'chronology. The banknotes issued eafliex seem ito continue
the poetical tradition by meanls of application of neo-Renaisisance cartouches
ornamented with rollworfc, the application of arabesque amid the -composition of
figures and ^draperies characteristic of the tradition of the academic painting of
the nineteenth century. Banknotes issued in the thirties reveal the stylistic ele-
ments according to the convention of a group “Rhythm”, the group recognized as
a representative of modern art of those times.
As a result of the analysis in 'the above presented article we can come to
the following conduisions:
1. Banknotes designed in 1919 xefered ito the history as to the only guarantee
for a state. Later, besides the national tradition contemporaneousness was stress-
ed with a special attention paid to the motif of the “Polish Sea” ais a symbol
of economic power. This -motif -was extremely popular in a propaganda of the
inter war period in Poland.
2. Historical references were dominated -by the element's of specially under-
stood romanticism manifested in a -cult of 'an outstanding individuality, a leader
of an uprisa'l that was meant to be a legitimation of PilSudiski’s government and
of his followers.
S. As the time parsed, modernization of the poeticis of banknotes of the thirties
was intended to -strass the “modernity of ‘the Second Polish Republic”.
4. A comparison of banknotes of the first and the second, group (show the
ideologization of the later. Designers gave up neutral — decorative composition
characteristic of the earlier period, and they showed tendency towards a big
ideological charge. Thus, they brought about a rise of persuasive function of an
image. The evolution is accompanied by evident stressing of the utilitarian role
of a banknote, and its function of ,money” which before had been dissembled.