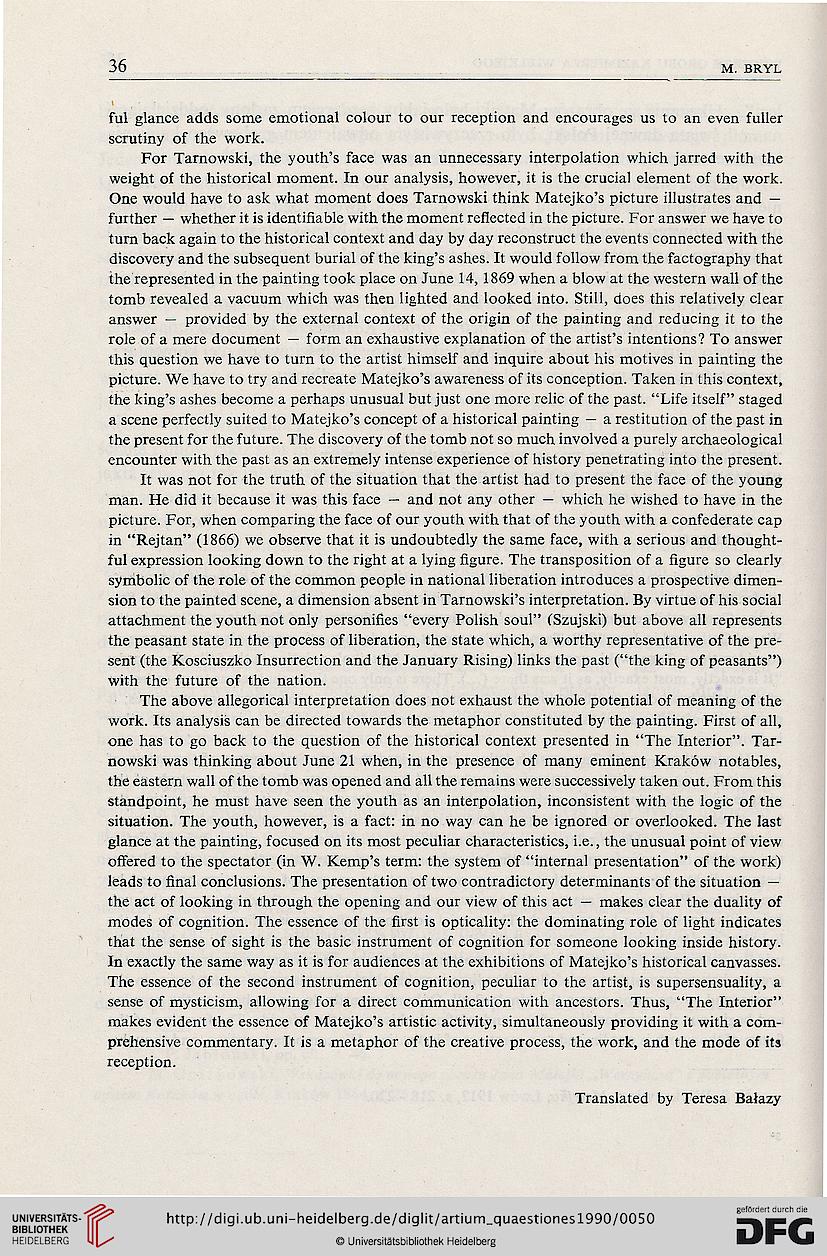 ful glance adds some emotional colour to our reception and encourages us to an even fuller
scrutiny of the work.

For Tarnowski, the youth’s face was an unnecessary interpolation which jarred with the
weight of the historical moment. In our analysis, however, it is the crucial element of the work.
One would have to ask what moment does Tarnowski think Matejko’s picture illustrates and —
further — whether it is identifiable with the moment reflected in the picture. For answer we have to
tum back again to the historical context and day by day reconstruct the events connected with the
discovery and the subseąuent burial of the king’s ashes. It would follow from the factography that
the represented in the painting took place on June 14, 1869 when a blow at the western wall of the
tomb revealed a vacuum which was then lighted and looked into. Still, does this relatively clear
answer — provided by the external context of the origin of the painting and reducing it to the
role of a mere document — form an exhaustive explanation of the artisfs intentions? To answer
this ąuestion we have to turn to the artist himself and inąuire about his motives in painting the
picture. We have to try and recreate Matejko’s awareness of its conception. Taken in this context,
the king’s ashes become a perhaps unusual but just one more relic of the past. “Life itself” staged
a scene perfectly suited to Matejko’s concept of a historical painting — a restitution of the past in
the present for the future. The discovery of the tomb not so much involved a purely archaeological
encounter with the past as an extremely intense experience of history penetrating into the present.

It was not for the truth of the situation that the artist had to present the face of the young
man. He did it because it was this face — and not any other — which he wished to have in the
picture. For, when comparing the face of our youth with that of the youth with a confederate cap
in “Rejtan” (1866) we observe that it is undoubtedly the same face, with a serious and thought-
ful expression looking down to the right at a lying figure. The transposition of a figure so clearly
symbolic of the role of the common people in national liberation introduces a prospective dimen-
sion to the painted scene, a dimension absent in Tarnowski’s interpretation. By virtue of his social
attachment the youth not only personifies “every Polish soul” (Szujski) but above all represents
the peasant state in the process of liberation, the state which, a worthy representative of the pre-
sent (the Kosciuszko Insurrection and the January Rising) links the past (“the king of peasants”)
with the future of the nation.

The above allegorical interpretation does not exhaust the whole potential of meaning of the
work. Its analysis can be directed towards the metaphor constituted by the painting. First of all,
one has to go back to the ąuestion of the historical context presented in “The Interior”. Tar-
nowski was thinking about June 21 when, in the presence of many eminent Kraków notables,
the eastern wall of the tomb was opened and all the remains were successively taken out. From this
standpoint, he must have seen the youth as an interpolation, inconsistent with the logic of the
situation. The youth, however, is a fact: in no way can he be ignored or overlooked. The last
glance at the painting, focused on its most peculiar characteristics, i.e., the unusual point of view
offered to the spectator (in W. Kemp’s term: the system of “internal presentation” of the work)
leads to final conclusions. The presentation of two contradictory determinants of the situation —
the act of looking in through the opening and our view of this act — makes clear the duality of
modes of cognition. The essence of the first is opticality: the dominating role of light indicates
that the sense of sight is the basic instrument of cognition for someone looking inside history.
In exactly the same way as it is for audiences at the exhibitions of Matejko’s historical canvasses.
The essence of the second instrument of cognition, peculiar to the artist, is supersensuality, a
sense of mysticism, allowing for a direct communication with ancestors. Thus, “The Interior”
makes evident the essence of Matejko’s artistic activity, simultaneously providing it with a com-
prehensive commentary. It is a metaphor of the creative process, the work, and the mode of its
reception.