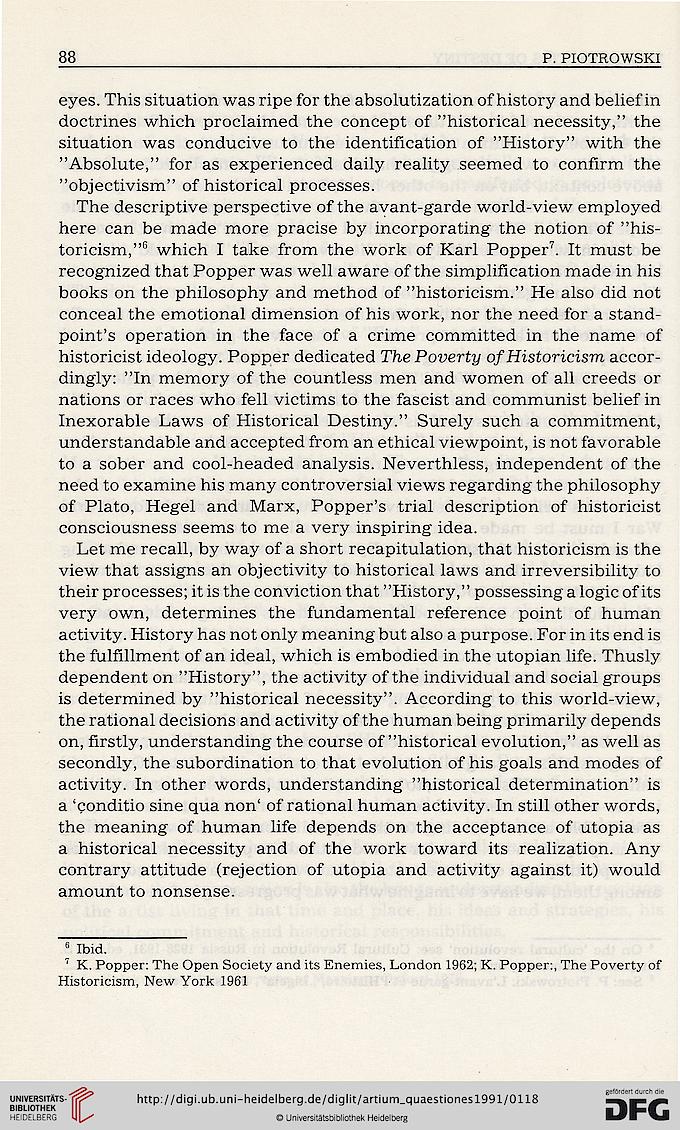 eyes. This situation was ripe for the absolutization of history and belief in
doctrines which proclaimed the concept of "historical necessity," the
situation was conducive to the identification of "History" with the
"Absolute," for as experienced daily reality seemed to confirm the
"objectivism" of historical processes.
The descriptive perspective of the avant-garde world-view employed
here can be made more pracise by incorporating the notion of "his-
toricism,which I take from the work of Karl Popper^. It must be
recognized that Popper was well aware of the simplification made in his
books on the philosophy and method of "historicism." He also did not
conceal the emotional dimension of his work, nor the need for a stand-
point's operation in the face of a crime committed in the name of
historicist ideology. Popper dedicated The Poverty of Historicism accor-
dingly: "In memory of the countless men and women of all creeds or
nations or races who fell victims to the fascist and communist belief in
Inexorable Laws of Historical Destiny." Surely such a commitment,
understandable and accepted from an ethical viewpoint, is not favorable
to a sober and cool-headed analysis. Neverthless, independent of the
need to examine his many controversial views regarding the philosophy
of Plato, Hegel and Marx, Popper's trial description of historicist
consciousness seems to me a very inspiring idea.
Let me recall, by way of a short recapitulation, that historicism is the
view that assigns an objectivity to historical laws and irreversibility to
their processes; it is the conviction that "History," possessing a logic of its
very own, determines the fundamental reference point of human
activity. History has not only meaning but also a purpose. For in its end is
the fulfillment of an ideal, which is embodied in the utopian life. Thusly
dependent on "History", the activity of the individual and social groups
is determined by "historical necessity". According to this world-view,
the rational decisions and activity of the human being primarily depends
on, firstly, understanding the course of "historical evolution," as well as
secondly, the subordination to that evolution of his goals and modes of
activity. In other words, understanding "historical determination" is
a 'conditio sine qua non' of rational human activity. In still other words,
the meaning of human life depends on the acceptance of utopia as
a historical necessity and of the work toward its realization. Any
contrary attitude (rejection of utopia and activity against it) would
amount to nonsense.