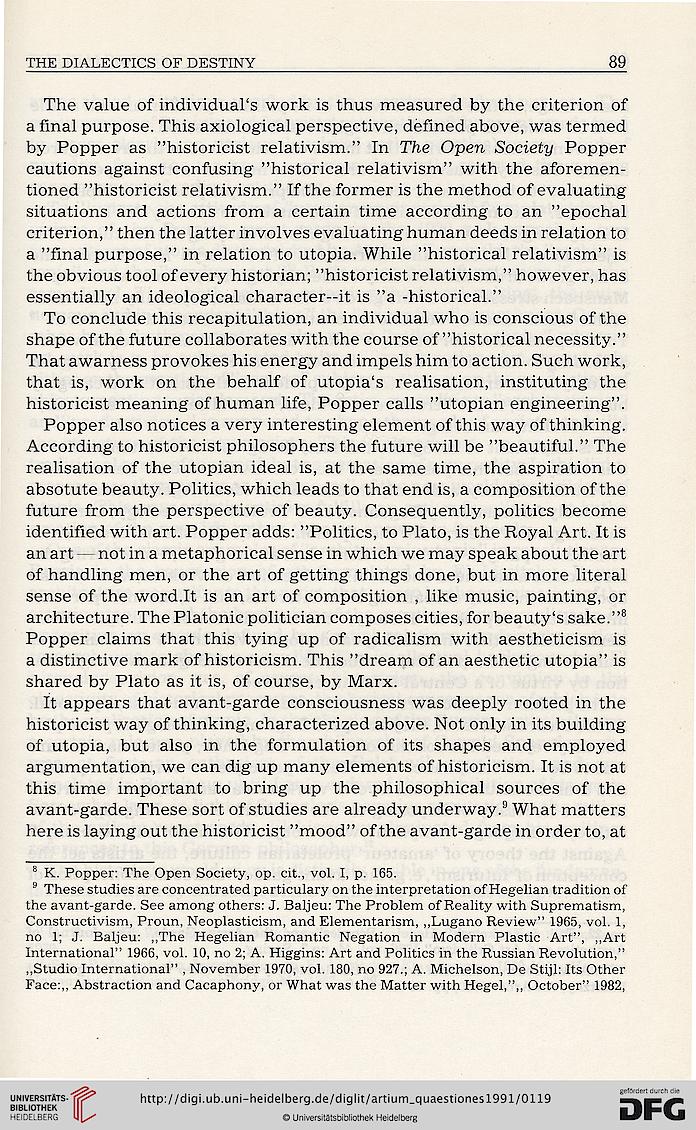 The value of individual's work is thus measured by the criterion of
a final purpose. This axiological perspective, defined above, was termed
by Popper as "historicist relativism." In The Open -Society Popper
cautions against confusing "historical relativism" with the aforemen-
tioned "historicist relativism." If the former is the method of evaluating
situations and actions from a certain time according to an "epochal
criterion," then the latter involves evaluating human deeds in relation to
a "final purpose," in relation to utopia. While "historical relativism" is
the obvious tool of every historian; "historicist relativism," however, has
essentially an ideological character—it is "a -historical."
To conclude this recapitulation, an individual who is conscious of the
shape of the future collaborates with the course of "historical necessity."
That awarness provokes his energy and impels him to action. Such work,
that is, work on the behalf of utopia's realisation, instituting the
historicist meaning of human life, Popper calls "utopian engineering".
Popper also notices a very interesting element of this way of thinking.
According to historicist philosophers the future will be "beautiful." The
realisation of the utopian ideal is, at the same time, the aspiration to
absotute beauty. Politics, which leads to that end is, a composition of the
future from the perspective of beauty. Consequently, politics become
identified with art. Popper adds: "Politics, to Plato, is the Royal Art. It is
an art — not in a metaphorical sense in which we may speak about the art
of handling men, or the art of getting things done, but in more literal
sense of the word.lt is an art of composition , like music, painting, or
architecture. The Platonic politician composes cities, for beauty's sake."^
Popper claims that this tying up of radicalism with aestheticism is
a distinctive mark of historicism. This "dream of an aesthetic utopia" is
shared by Plato as it is, of course, by Marx.
It appears that avant-garde consciousness was deeply rooted in the
historicist way of thinking, characterized above. Not only in its building
of utopia, but also in the formulation of its shapes and employed
argumentation, we can dig up many elements of historicism. It is not at
this time important to bring up the philosophical sources of the
avant-garde. These sort of studies are already underway.^ What matters
here is laying out the historicist "mood" of the avant-garde in order to, at

s K. Popper: The Open Society, op. cit., vol. I, p. 165.
9 These studies are concentrated particulary on the interpretation of Hegelian tradition of
the avant-garde. See among others: J. Baljeu: The Problem of Reality with Suprematism,
Constructivism, Proun. Neoplasticism, and Elementarism, ,,Lugano Review" 1965, vol. 1,
no 1; J. Baljeu: ,,The Hegelian Romantic Negation in Modern Plastic Art", „Art
International" 1966, vol. 10, no 2; A. Higgins: Art and Politics in the Russian Revolution,"
„Studio International" , November 1970, vol. 180, no 927.; A. Michelson, De Stijl: Its Other
Face:,, Abstraction and Cacaphony, or What was the Matter with Hegel,",, October" 1982,