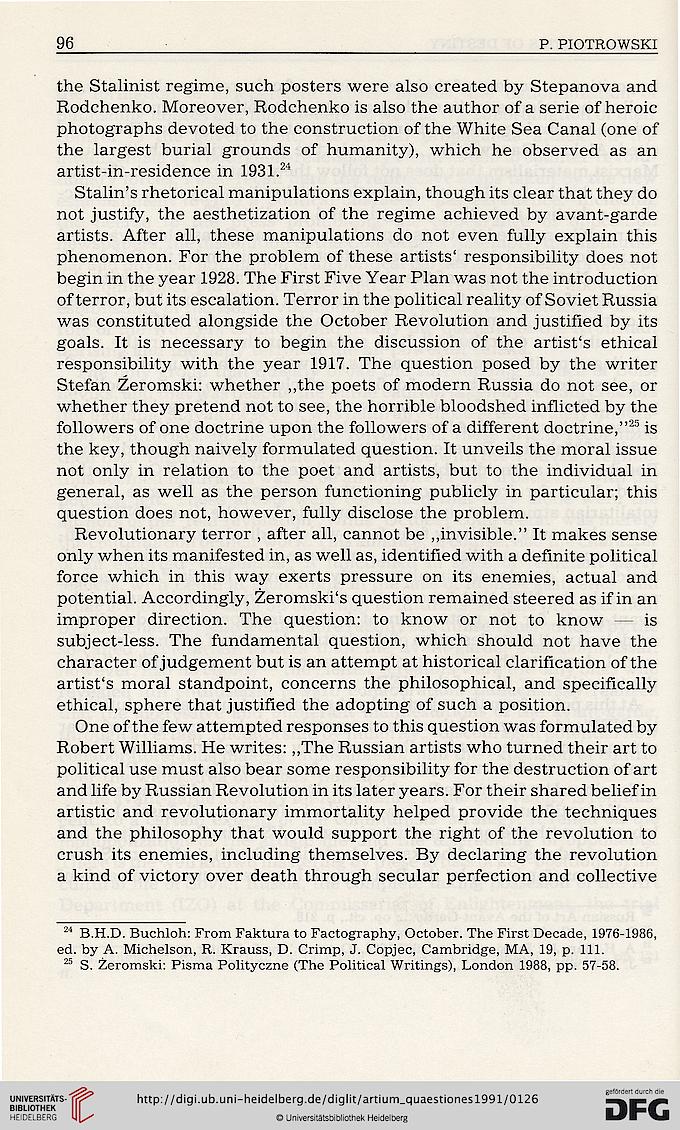 the Stalinist regime, such posters were also created by Stepanova and
Rodchenko. Moreover, Rodchenko is also the author of a serie of heroic
photographs devoted to the construction of the White Sea Canal (one of
the largest burial grounds of humanity), which he observed as an
artist-in-residence in 1931.^
Stalin's rhetorical manipulations explain, though its clear that they do
not justify, the aesthetization of the regime achieved by avant-garde
artists. After all, these manipulations do not even fully explain this
phenomenon. For the problem of these artists' responsibility does not
begin in the year 1928. The First Five Year Plan was not the introduction
of terror, but its escalation. Terror in the political reality of Soviet Russia
was constituted alongside the October Revolution and justified by its
goals. It is necessary to begin the discussion of the artist's ethical
responsibility with the year 1917. The question posed by the writer
Stefan Żeromski: whether ,,the poets of modern Russia do not see, or
whether they pretend not to see, the horrible bloodshed inflicted by the
followers of one doctrine upon the followers of a different doctrine,"^ is
the key, though naively formulated question. It unveils the moral issue
not only in relation to the poet and artists, but to the individual in
general, as well as the person functioning publicly in particular; this
question does not, however, fully disclose the problem.
Revolutionary terror , after all, cannot be ,,invisible." It makes sense
only when its manifested in, as well as, identified with a definite political
force which in this way exerts pressure on its enemies, actual and
potential. Accordingly, Żeromski's question remained steered as if in an
improper direction. The question: to know or not to know — is
subject-less. The fundamental question, which should not have the
character of judgement but is an attempt at historical clarification of the
artist's moral standpoint, concerns the philosophical, and specifically
ethical, sphere that justified the adopting of such a position.
One of the few attempted responses to this question was formulated by
Robert Williams. He writes: ,,The Russian artists who turned their art to
political use must also bear some responsibility for the destruction of art
and life by Russian Revolution in its later years. For their shared belief in
artistic and revolutionary immortality helped provide the techniques
and the philosophy that would support the right of the revolution to
crush its enemies, including themselves. By declaring the revolution
a kind of victory over death through secular perfection and collective