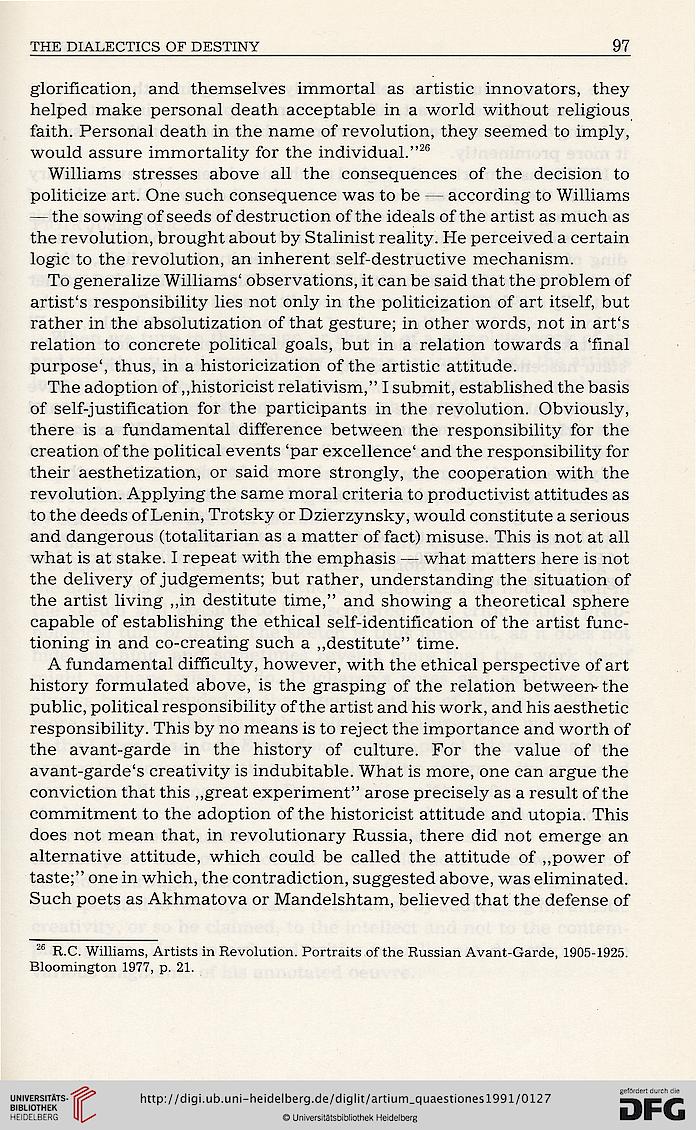 glorification, and themselves immortal as artistic innovators, they
helped make personal death acceptable in a world without religious
faith. Personal death in the name of revolution, they seemed to imply,
would assure immortality for the individual."^
Williams stresses above all the consequences of the decision to
politicize art. One such consequence was to be — according to Williams
— the sowing of seeds of destruction of the ideals of the artist as much as
the revolution, brought about by Stalinist reality. He perceived a certain
logic to the revolution, an inherent self-destructive mechanism.
To generalize Williams' observations, it can be said that the problem of
artist's responsibility lies not only in the politicization of art itself, but
rather in the absolutization of that gesture; in other words, not in art's
relation to concrete political goals, but in a relation towards a 'final
purpose', thus, in a historicization of the artistic attitude.
The adoption of ,,historicist relativism," I submit, established the basis
of self-justification for the participants in the revolution. Obviously,
there is a fundamental difference between the responsibility for the
creation of the political events 'par excellence' and the responsibility for
their aesthetization, or said more strongly, the cooperation with the
revolution. Applying the same moral criteria to productivist attitudes as
to the deeds of Lenin, Trotsky or Dzierzynsky, would constitute a serious
and dangerous (totalitarian as a matter of fact) misuse. This is not at all
what is at stake. I repeat with the emphasis — what matters here is not
the delivery of judgements; but rather, understanding the situation of
the artist living ,,in destitute time," and showing a theoretical sphere
capable of establishing the ethical self-identification of the artist func-
tioning in and co-creating such a ,,destitute" time.
A fundamental difficulty, however, with the ethical perspective of art
history formulated above, is the grasping of the relation between-the
public, political responsibility of the artist and his work, and his aesthetic
responsibility. This by no means is to reject the importance and worth of
the avant-garde in the history of culture. For the value of the
avant-garde's creativity is indubitable. What is more, one can argue the
conviction that this ,,great experiment" arose precisely as a result of the
commitment to the adoption of the historicist attitude and utopia. This
does not mean that, in revolutionary Russia, there did not emerge an
alternative attitude, which could be called the attitude of ,,power of
taste;" one in which, the contradiction, suggested above, was eliminated.
Such poets as Akhmatova or Mandelshtam, believed that the defense of