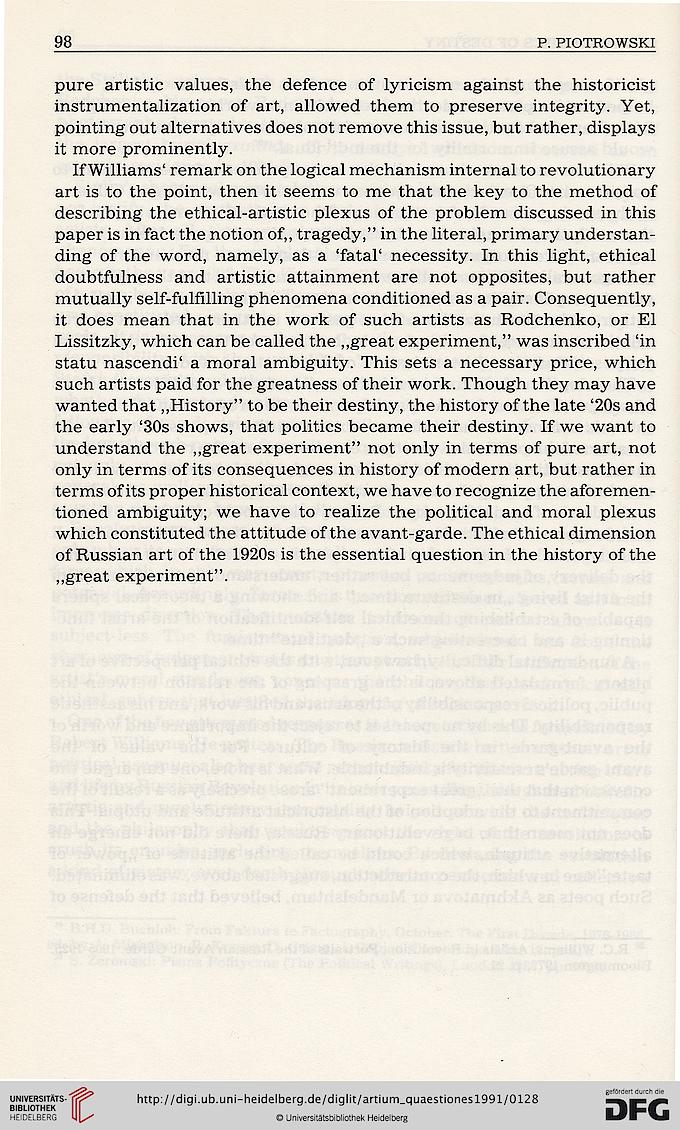 pure artistic values, the defence of lyricism against the historicist
instrumentalization of art, allowed them to preserve integrity. Yet,
pointing out alternatives does not remove this issue, but rather, displays
it more prominently.
If Williams' remark on the logical mechanism internal to revolutionary
art is to the point, then it seems to me that the key to the method of
describing the ethical-artistic plexus of the problem discussed in this
paper is in fact the notion of,, tragedy," in the literal, primary understan-
ding of the word, namely, as a 'fatal' necessity. In this light, ethical
doubtfulness and artistic attainment are not opposites, but rather
mutually self-fulfilling phenomena conditioned as a pair. Consequently,
it does mean that in the work of such artists as Rodchenko, or El
Lissitzky, which can be called the ,,great experiment," was inscribed 'in
statu nascendi' a moral ambiguity. This sets a necessary price, which
such artists paid for the greatness of their work. Though they may have
wanted that,,History" to be their destiny, the history of the late '20s and
the early '30s shows, that politics became their destiny. If we want to
understand the ,,great experiment" not only in terms of pure art, not
only in terms of its consequences in history of modern art, but rather in
terms of its proper historical context, we have to recognize the aforemen-
tioned ambiguity; we have to realize the political and moral plexus
which constituted the attitude of the avant-garde. The ethical dimension
of Russian art of the 1920s is the essential question in the history of the
,,great experiment".