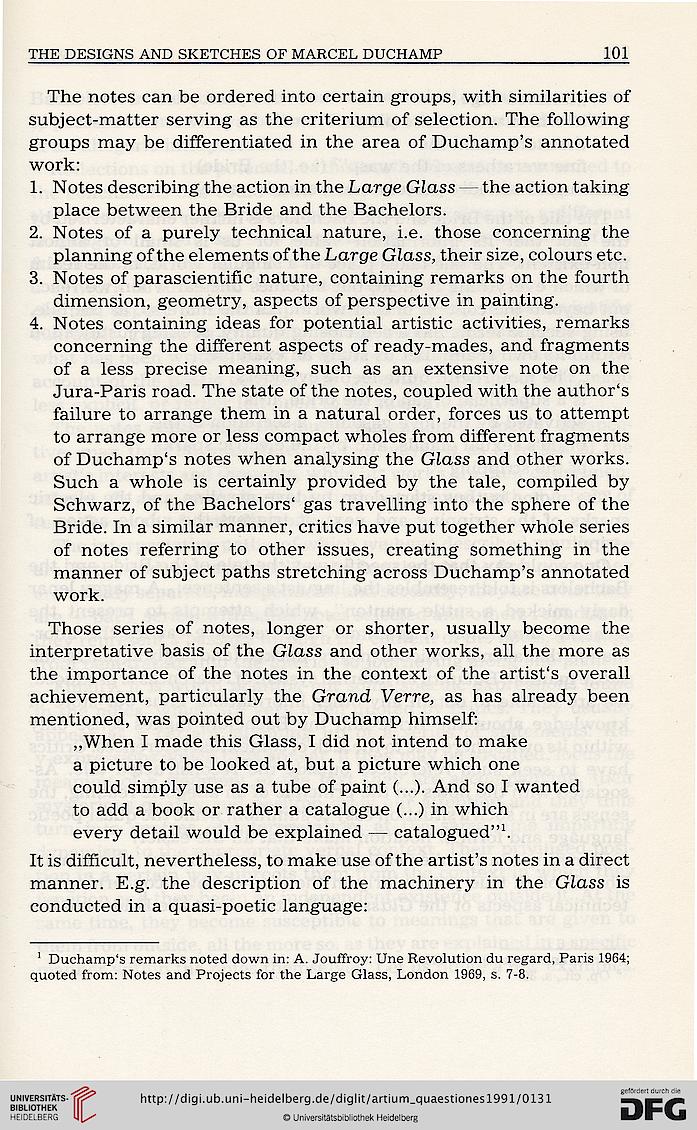 The notes can be ordered into certain groups, with similarities of
subject-matter serving as the criterium of selection. The following
groups may be differentiated in the area of Duchamp's annotated
work:
1. Notes describing the action in the Large Glass — the action taking
place between the Bride and the Bachelors.
2. Notes of a purely technical nature, i.e. those concerning the
planning of the elements of the Large Glass, their size, colours etc.
3. Notes of parascientitic nature, containing remarks on the fourth
dimension, geometry, aspects of perspective in painting.
4. Notes containing ideas for potential artistic activities, remarks
concerning the different aspects of ready-mades, and fragments
of a less precise meaning, such as an extensive note on the
Jura-Paris road. The state of the notes, coupled with the author's
failure to arrange them in a natural order, forces us to attempt
to arrange more or less compact wholes from different fragments
of Duchamp's notes when analysing the Glass and other works.
Such a whole is certainly provided by the tale, compiled by
Schwarz, of the Bachelors' gas travelling into the sphere of the
Bride. In a similar manner, critics have put together whole series
of notes referring to other issues, creating something in the
manner of subject paths stretching across Duchamp's annotated
work.
Those series of notes, longer or shorter, usually become the
interpretative basis of the Glass and other works, all the more as
the importance of the notes in the context of the artist's overall
achievement, particularly the Grand Verre, as has already been
mentioned, was pointed out by Duchamp himself:
,,When I made this Glass, I did not intend to make
a picture to be looked at, but a picture which one
could simply use as a tube of paint (...). And so I wanted
to add a book or rather a catalogue (...) in which
every detail would be explained — catalogued'T
It is difficult, nevertheless, to make use of the artist's notes in a direct
manner. E.g. the description of the machinery in the Glass is
conducted in a quasi-poetic language: