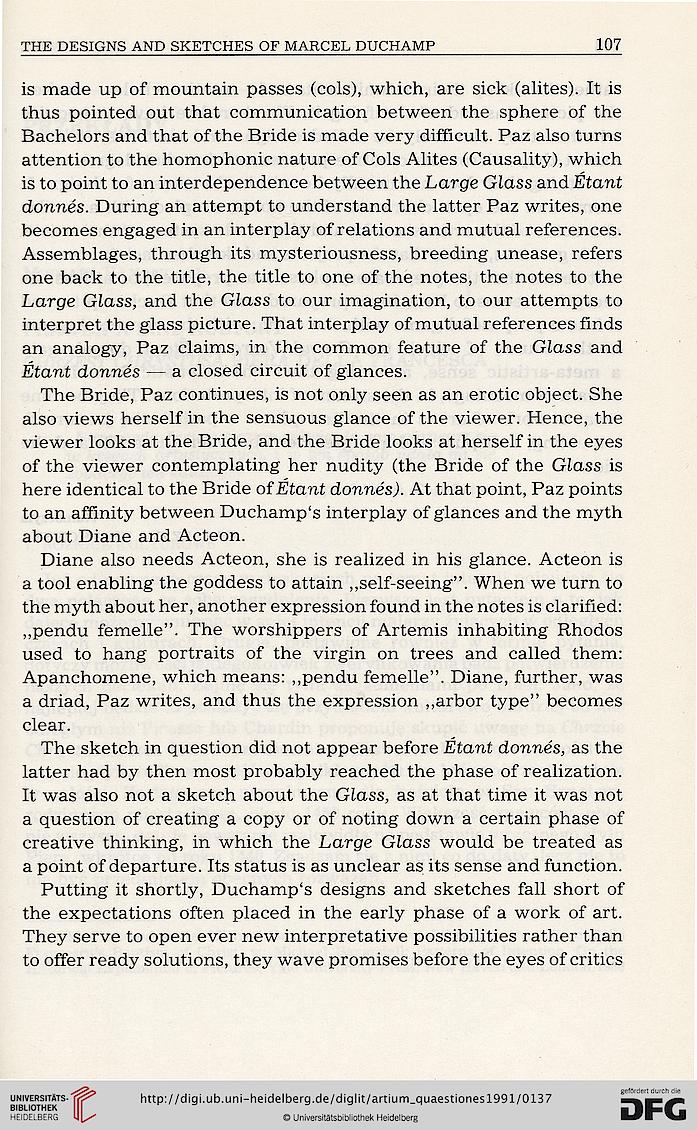 is made up of mountain passes (cols), which, are sick (alites). It is
thus pointed out that communication between the sphere of the
Bachelors and that of the Bride is made very difficult. Paz also turns
attention to the homophonic nature of Cols Alites (Causality), which
is to point to an interdependence between the Large Glass and EtaRt
domres. During an attempt to understand the latter Paz writes, one
becomes engaged in an interplay of relations and mutual references.
Assemblages, through its mysteriousness, breeding unease, refers
one back to the title, the title to one of the notes, the notes to the
Large Glass, and the Glass to our imagination, to our attempts to
interpret the glass picture. That interplay of mutual references finds
an analogy, Paz claims, in the common feature of the Glass and
EtaRt doRRes — a closed circuit of glances.
The Bride, Paz continues, is not only seen as an erotic object. She
also views herself in the sensuous glance of the viewer. Hence, the
viewer looks at the Bride, and the Bride looks at herself in the eyes
of the viewer contemplating her nudity (the Bride of the Glass is
here identical to the Bride of EtaRt doRRes). At that point, Paz points
to an affinity between Duchamp's interplay of glances and the myth
about Diane and Acteon.
Diane also needs Acteon, she is realized in his glance. Acteon is
a tool enabling the goddess to attain ,,self-seeing". When we turn to
the myth about her, another expression found in the notes is clarified:
,,pendu femelle". The worshippers of Artemis inhabiting Rhodos
used to hang portraits of the virgin on trees and called them:
Apanchomene, which means: ,,pendu femelle". Diane, further, was
a driad, Paz writes, and thus the expression ,,arbor type" becomes
clear.
The sketch in question did not appear before EtaRt doRRes, as the
latter had by then most probably reached the phase of realization.
It was also not a sketch about the Glass, as at that time it was not
a question of creating a copy or of noting down a certain phase of
creative thinking, in which the Large Glass would be treated as
a point of departure. Its status is as unclear as its sense and function.
Putting it shortly, Duchamp's designs and sketches fall short of
the expectations often placed in the early phase of a work of art.
They serve to open ever new interpretative possibilities rather than
to offer ready solutions, they wave promises before the eyes of critics