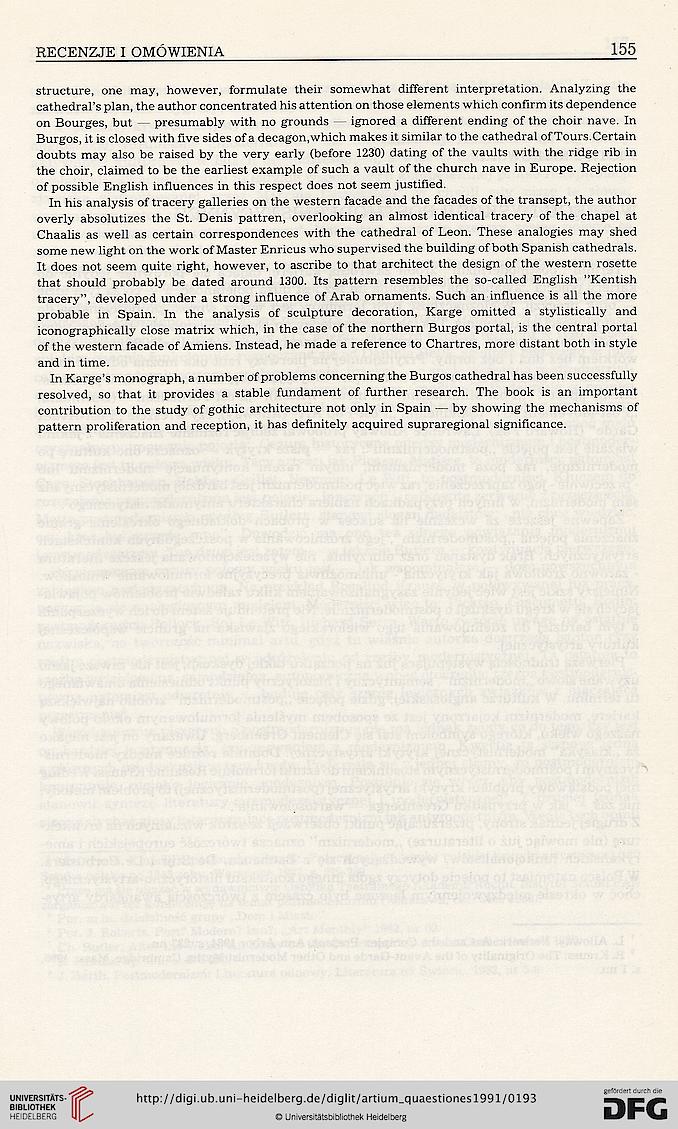 structure, one may, however, formulate their somewhat different interpretation. Analyzing the
cathedral's plan, the author concentrated his attention on those elements which confirm its dependence
on Bourges, but — presumably with no grounds — ignored a different ending of the choir nave. In
Burgos, it is closed with five sides of a decagon,which makes it similar to the cathedral of Tours.Certain
doubts may also be raised by the very early (before 1230) dating of the vaults with the ridge rib in
the choir, claimed to be the earliest example of such a vault of the church nave in Europe. Rejection
of possible English influences in this respect does not seem justified.
In his analysis of tracery galleries on the western facade and the facades of the transept, the author
overly absolutizes the St. Denis pattren, overlooking an almost identical tracery of the chapel at
Chaalis as well as certain correspondences with the cathedral of Leon. These analogies may shed
some new light on the work of Master Enricus who supervised the building of both Spanish cathedrals.
It does not seem quite right, however, to ascribe to that architect the design of the western rosette
that should probably be dated around 1300. Its pattern resembles the so-called English "Kentish
tracery", developed under a strong influence of Arab ornaments. Such an influence is all the more
probable in Spain. In the analysis of sculpture decoration, Karge omitted a stylistically and
iconographically close matrix which, in the case of the northern Burgos portal, is the central portal
of the western facade of Amiens. Instead, he made a reference to Chartres, more distant both in style
and in time.
In Karge's monograph, a number of problems concerning the Burgos cathedral has been successfully
resolved, so that it provides a stable fundament of further research. The book is an important
contribution to the study of gothic architecture not only in Spain — by showing the mechanisms of
pattern proliferation and reception, it has definitely acquired supraregional significance.