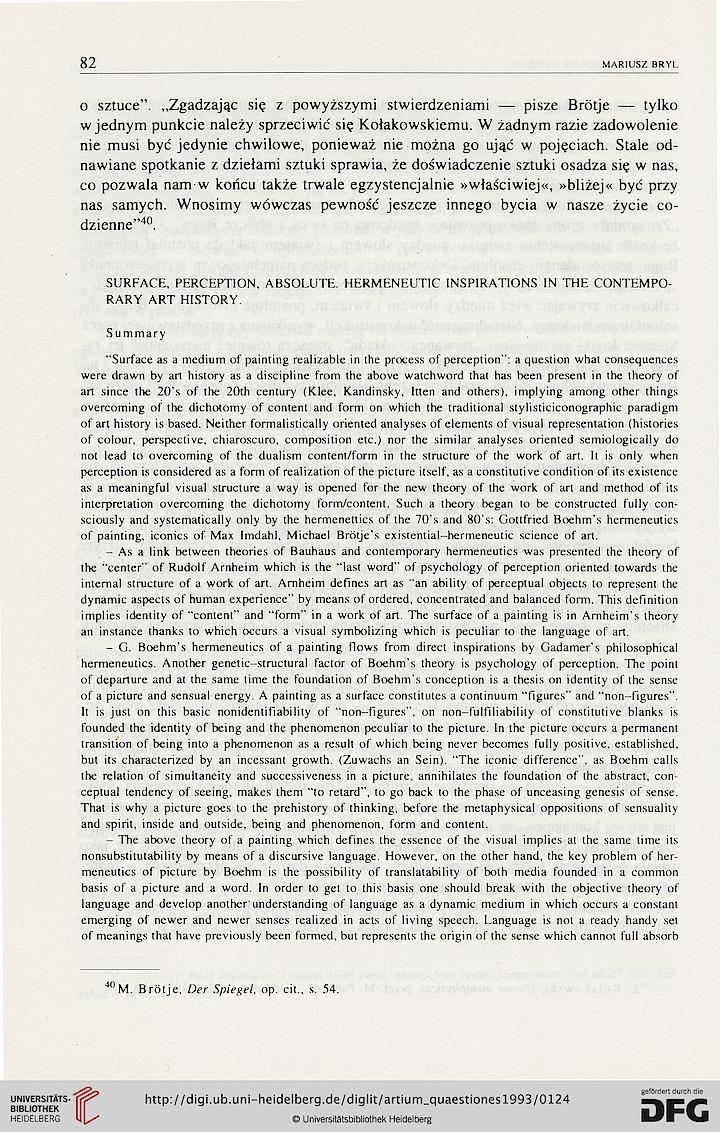 SURFACE, PERCEPTION, ABSOLUTE. HERMENEUTIC INSPIRATIONS IN THE CONTEMPO-
RARY ART HISTORY.
Summary
“Surface as a medium of painting realizable in the process of perception”: a question what consequences
were drawn by art history as a discipline from the above watchword that has been present in the theory of
art since the 20’s of the 20th century (Klee, Kandinsky, Itten and others), implying among other things
overcoming of the dichotomy of content and form on which the traditional stylisticiconographic paradigm
of art history is based. Neither formalistically oriented analyses of elements of visual representation (histories
of colour, perspective, chiaroscuro, composition etc.) nor the similar analyses oriented semiologically do
not lead to overcoming of the dualism content/form in the structure of the work of art. It is only when
perception is considered as a form of realization of the picture itself, as a constitutive condition of its existence
as a meaningful visual structure a way is opened for the new theory of the work of art and method of its
interpretation overcoming the dichotomy form/content. Such a theory began to be constructed fully con-
sciously and systematically only by the hermenettics of the 70’s and 80’s: Gottfried Boehm’s hermeneutics
of painting, iconics of Max Imdahl, Michael Brötje's existential-hermeneutic science of art.
- As a link between theories of Bauhaus and contemporary hermeneutics was presented the theory of
the “center” of Rudolf Arnheim which is the “last word” of psychology of perception oriented towards the
internal structure of a work of art. Amheim defines art as “an ability of perceptual objects to represent the
dynamic aspects of human experience” by means of ordered, concentrated and balanced form. This definition
implies identity of “content” and “form” in a work of art. The surface of a painting is in Amheim’s theory
an instance thanks to which occurs a visual symbolizing which is peculiar to the language of art.
- G. Boehm’s hermeneutics of a painting flows from direct inspirations by Gadamer’s philosophical
hermeneutics. Another genetic-structural factor of Boehm’s theory is psychology of perception. The point
of departure and at the same time the foundation of Boehm’s conception is a thesis on identity of the sense
of a picture and sensual energy. A painting as a surface constitutes a continuum “figures" and “non-figures”.
It is just on this basic nonidentifiability of “non-figures”, on non—fulfiliability of constitutive blanks is
founded the identity of being and the phenomenon peculiar to the picture. In the picture occurs a permanent
transition of being into a phenomenon as a result of which being never becomes fully positive, established,
but its characterized by an incessant growth. (Zuwachs an Sein). “The iconic difference”, as Boehm calls
the relation of simultaneity and successiveness in a picture, annihilates the foundation of the abstract, con-
ceptual tendency of seeing, makes them “to retard”, to go back to the phase of unceasing genesis of sense.
That is why a picture goes to the prehistory of thinking, before the metaphysical oppositions of sensuality
and spirit, inside and outside, being and phenomenon, form and content.
- The above theory of a painting which defines the essence of the visual implies at the same time its
nonsubstitutability by means of a discursive language. However, on the other hand, the key problem of her-
meneutics of picture by Boehm is the possibility of translatability of both media founded in a common
basis of a picture and a word. In order to get to this basis one should break with the objective theory of
language and develop another'understanding of language as a dynamic medium in which occurs a constant
emerging of newer and newer senses realized in acts of living speech. Language is not a ready handy set
of meanings that have previously been formed, but represents the origin of the sense which cannot full absorb