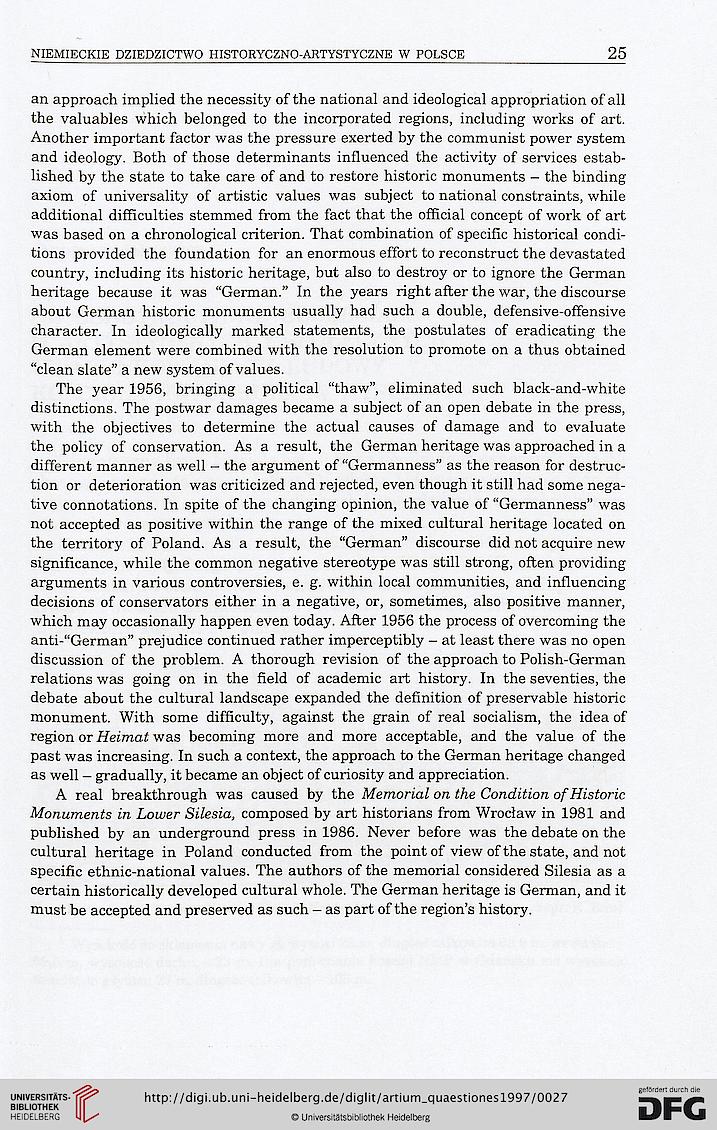 an approach implied the necessity of the national and ideological appropriation of all
the valuables which belonged to the incorporated regions, including works of art.
Another important factor was the pressure exerted by the communist power system
and ideology. Both of those determinants influenced the activity of services estab-
lished by the state to take care of and to restore historie monuments - the binding
axiom of universality of artistic values was subject to national constraints, while
additional difficulties stemmed from the fact that the official concept of work of art
was based on a chronological criterion. That combination of specific historical condi-
tions provided the foundation for an enormous effort to reconstruct the devastated
country, including its historie heritage, but also to destroy or to ignore the German
heritage because it was “German.” In the years right after the war, the discourse
about German historie monuments usually had such a double, defensive-offensive
character. In ideologically marked statements, the postulates of eradicating the
German element were combined with the resolution to promote on a thus obtained
“clean siatę” a new system of values.
The year 1956, bringing a political “thaw”, eliminated such black-and-white
distinctions. The postwar damages became a subject of an open debate in the press,
with the objectives to determine the actual causes of damage and to evaluate
the policy of conservation. As a result, the German heritage was approached in a
different manner as well - the argument of “Germanness” as the reason for destruc-
tion or deterioration was criticized and rejected, even though it still had some nega-
tive connotations. In spite of the changing opinion, the value of “Germanness” was
not accepted as positive within the rangę of the mixed cultural heritage located on
the territory of Poland. As a result, the “German” discourse did not acąuire new
significance, while the common negative stereotype was still strong, often providing
arguments in various controversies, e. g. within local communities, and influencing
decisions of conservators either in a negative, or, sometimes, also positive manner,
which may occasionally happen even today. After 1956 the process of overcoming the
anti-“German” prejudice continued rather imperceptibly - at least there was no open
discussion of the problem. A thorough revision of the approach to Polish-German
relations was going on in the field of academic art history. In the seventies, the
debate about the cultural landscape expanded the definition of preservable historie
monument. With some difficulty, against the grain of real socialism, the idea of
region or Heimat was becoming morę and morę acceptable, and the value of the
past was inereasing. In such a context, the approach to the German heritage changed
as well - gradually, it became an object of curiosity and appreciation.
A real breakthrough was caused by the Memoriał on the Condition of Historie
Monuments in Lower Silesia, composed by art historians from Wrocław in 1981 and
published by an underground press in 1986. Never before was the debate on the
cultural heritage in Poland conducted from the point of view of the state, and not
specific ethnic-national values. The authors of the memoriał considered Silesia as a
certain historically developed cultural whole. The German heritage is German, and it
must be accepted and preserved as such - as part of the region’s history.