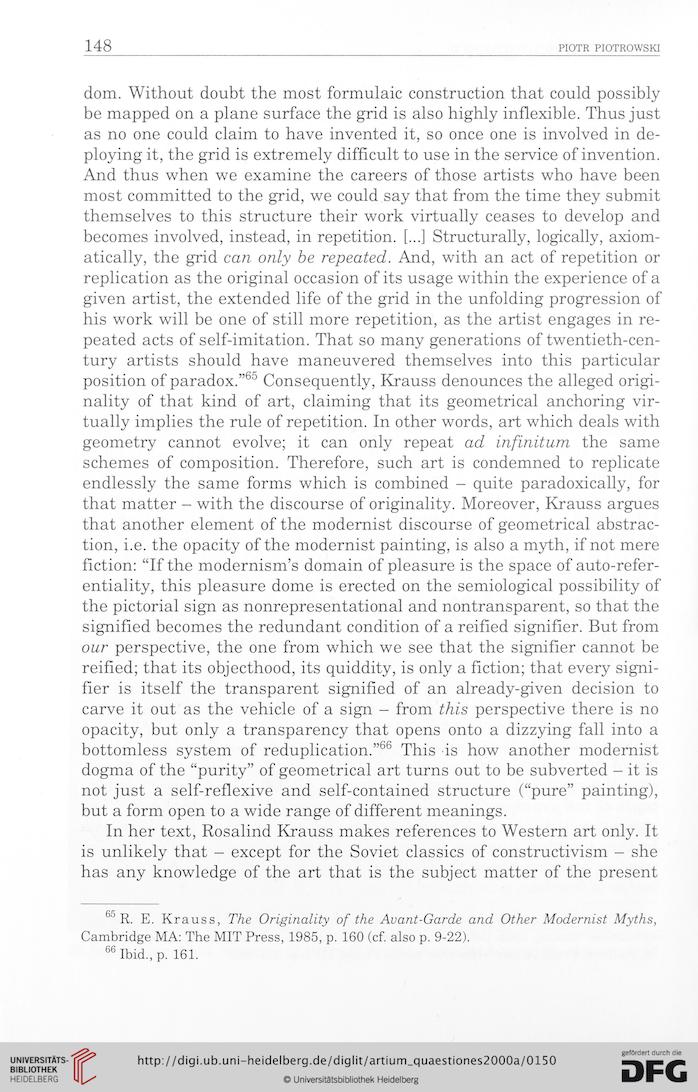 dom. Without doubt the most formulaic construction that could possibly
be mapped on a piane surface the grid is also highly inflexible. Thus just
as no one could claim to have invented it, so once one is involved in de-
ploying it, the grid is extremely difficult to use in the service of invention.
And thus when we examine the careers of those artists who have been
most committed to the grid, we could say that from the time they submit
themselves to this structure their work virtually ceases to develop and
becomes involved, instead, in repetition. [...] Structurally, logically, axiom-
atically, the grid can only be repeated. And, with an act of repetition or
replication as the original occasion of its usage within the experience of a
given artist, the extended life of the grid in the unfolding progression of
his work will be one of still morę repetition, as the artist engages in re-
peated acts of self-imitation. That so many generations of twentieth-cen-
tury artists should have maneuvered themselves into this particular
position of paradox.”65 Conseąuently, Krauss denounces the alleged origi-
nality of that kind of art, claiming that its geometrical anchoring vir-
tually implies the rule of repetition. In other words, art which deals with
geometry cannot evolve; it can only repeat ad infinitum the same
schemes of composition. Therefore, such art is condemned to replicate
endlessly the same forms which is combined - ąuite paradoxically, for
that matter - with the discourse of originality. Moreover, Krauss argues
that another element of the modernist discourse of geometrical abstrac-
tion, i.e. the opacity of the modernist painting, is also a myth, if not mere
fiction: “If the modernisnTs domain of pleasure is the space of auto-refer-
entiality, this pleasure dome is erected on the semiological possibility of
the pictorial sign as nonrepresentational and nontransparent, so that the
signified becomes the redundant condition of a reified signifier. But from
our perspective, the one from which we see that the signifier cannot be
reified; that its objecthood, its ąuiddity, is only a fiction; that every signi-
fier is itself the transparent signified of an already-given decision to
carve it out as the vehicle of a sign - from this perspective there is no
opacity, but only a transparency that opens onto a dizzying fali into a
bottomless system of reduplication.”66 This is how another modernist
dogma of the “purity” of geometrical art turns out to be subverted - it is
not just a self-reflexive and self-contained structure (“pure” painting),
but a form open to a wide rangę of different meanings.
In her text, Rosalind Krauss makes references to Western art only. It
is unlikely that - except for the Soviet classics of constructivism - she
has any knowledge of the art that is the subject matter of the present