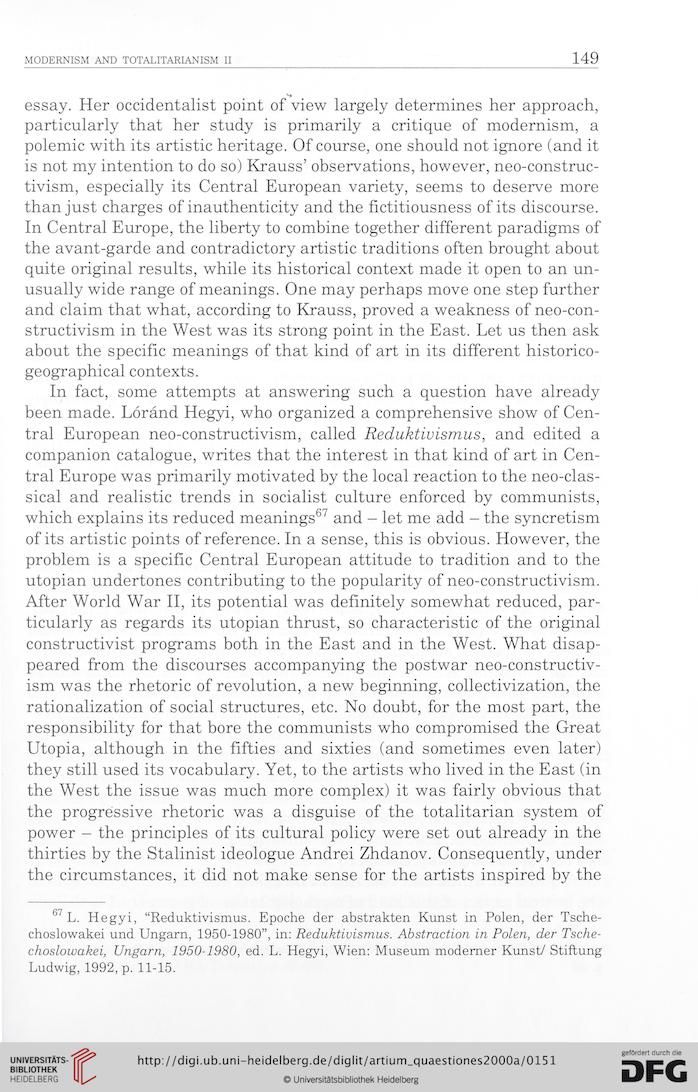 essay. Her occidentalist point of view largely determines her approach,
particularly that her study is primarily a critiąue of modernism, a
polemic with its artistic heritage. Of course, one should not ignore (and it
is not my intention to do so) Krauss’ observations, however, neo-construc-
tivism, especially its Central European variety, seems to deserve morę
than just charges of inauthenticity and the fictitiousness of its discourse.
In Central Europę, the liberty to combine together different paradigms of
the avant-garde and contradictory artistic traditions often brought about
ąuite original results, while its historical context madę it open to an un-
usually wide rangę of meanings. One may perhaps move one step further
and claim that what, according to Krauss, proved a weakness of neo-con-
structivism in the West was its strong point in the East. Let us then ask
about the specific meanings of that kind of art in its different historico-
geographical contexts.
In fact, some attempts at answering such a ąuestion have already
been madę. Lórand Hegyi, who organized a comprehensive show of Cen-
tral European neo-constructivism, called Reduktiuismus, and edited a
companion catalogue, writes that the interest in that kind of art in Cen-
tral Europę was primarily motivated by the local reaction to the neo-clas-
sical and realistic trends in socialist culture enforced by communists,
which explains its reduced meanings67 and - let me add - the syncretism
of its artistic points of reference. In a sense, this is obvious. However, the
problem is a specific Central European attitude to tradition and to the
utopian undertones contributing to the popularity of neo-constructivism.
After World War II, its potential was definitely somewhat reduced, par-
ticularly as regards its utopian thrust, so characteristic of the original
constructivist programs both in the East and in the West. What disap-
peared from the discourses accompanying the postwar neo-constructiv-
ism was the rhetoric of revolution, a new beginning, collectivization, the
rationalization of social structures, etc. No doubt, for the most part, the
responsibility for that borę the communists who compromised the Great
Utopia, although in the fifties and sixties (and sometimes even later)
they still used its vocabulary. Yet, to the artists who lived in the East (in
the West the issue was much morę complex) it was fairly obvious that
the progressive rhetoric was a disguise of the totalitarian system of
power - the principles of its cultural policy were set out already in the
thirties by the Stalinist ideologue Andrei Zhdanov. Conseąuently, under
the circumstances, it did not make sense for the artists inspired by the