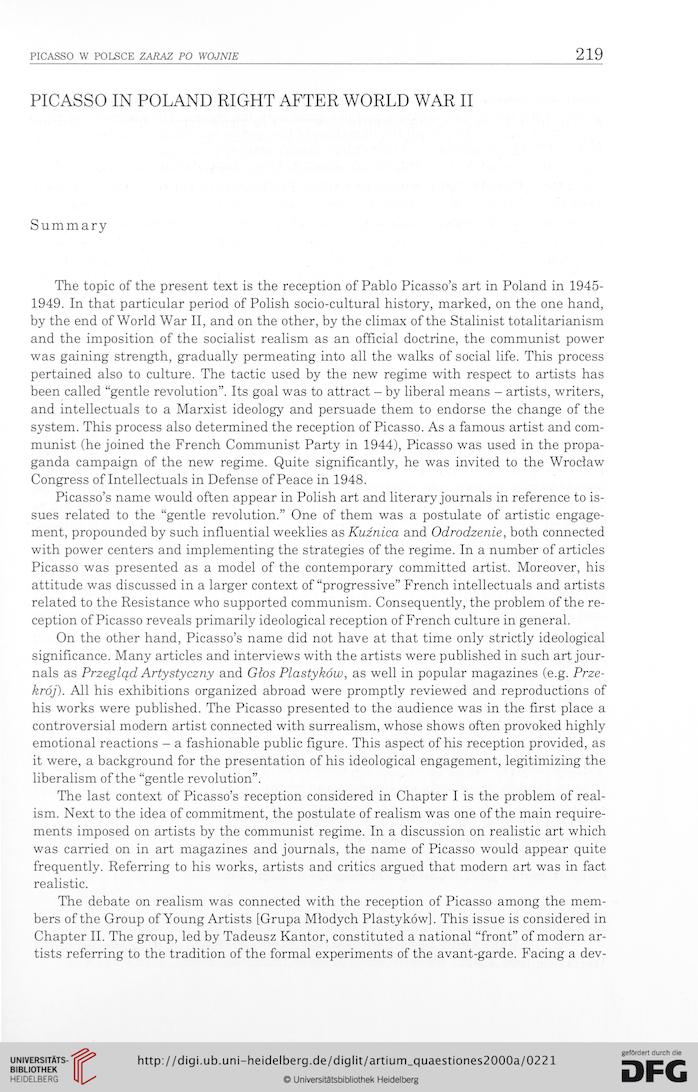 The topie of the present text is the reception of Pablo Picasso’s art in Poland in 1945-
1949. In that particular period of Polish socio-cultural history, marked, on the one hand,
by the end of World War II, and on the other, by the climax of the Stalinist totalitarianism
and the imposition of the socialist realism as an official doctrine, the communist power
was gaining strength, gradually permeating into all the walks of social life. This process
pertained also to culture. The tactic used by the new regime with respect to artists has
been called “gentle revolution”. Its goal was to attract - by liberał means - artists, writers,
and intellectuals to a Marxist ideology and persuade them to endorse the change of the
system. This process also determined the reception of Picasso. As a famous artist and com-
munist (he joined the French Communist Party in 1944), Picasso was used in the propa-
ganda campaign of the new regime. Quite significantly, he was invited to the Wrocław
Congress of Intellectuals in Defense of Peace in 1948.
Picasso’s name would often appear in Polish art and literary joumals in reference to is-
sues related to the “gentle revolution.” One of them was a postulate of artistic engage-
ment, propounded by such influential weeklies as Kuźnica and Odrodzenie, both connected
with power centers and implementing the strategies of the regime. In a number of articles
Picasso was presented as a model of the contemporary committed artist. Moreover, his
attitude was discussed in a larger context of “progressive” French intellectuals and artists
related to the Resistance who supported communism. Conseąuently, the problem of the re-
ception of Picasso reveals primarily ideological reception of French culture in generał.
On the other hand, Picasso’s name did not have at that time only strictly ideological
significance. Many articles and interviews with the artists were published in such art jour-
nals as Przegląd Artystyczny and Głos Plastyków, as well in popular magazines (e.g. Prze-
krój). All his exhibitions organized abroad were promptly reviewed and reproductions of
his works were published. The Picasso presented to the audience was in the first place a
controversial modem artist connected with surrealism, whose shows often provoked highly
emotional reactions - a fashionable public figurę. This aspect of his reception provided, as
it were, a background for the presentation of his ideological engagement, legitimizing the
liberalism of the “gentle revolution”.
The last context of Picasso’s reception considered in Chapter I is the problem of real-
ism. Next to the idea of commitment, the postulate of realism was one of the main reąuire-
ments imposed on artists by the communist regime. In a discussion on realistic art which
was carried on in art magazines and journals, the name of Picasso would appear ąuite
freąuently. Referring to his works, artists and critics argued that modern art was in fact
realistic.
The debate on realism was connected with the reception of Picasso among the mem-
bers of the Group of Young Artists [Grupa Młodych Plastyków]. This issue is considered in
Chapter II. The group, led by Tadeusz Kantor, constituted a national “front” of modern ar-
tists referring to the tradition of the formal experiments of the avant-gardę. Facing a dev-