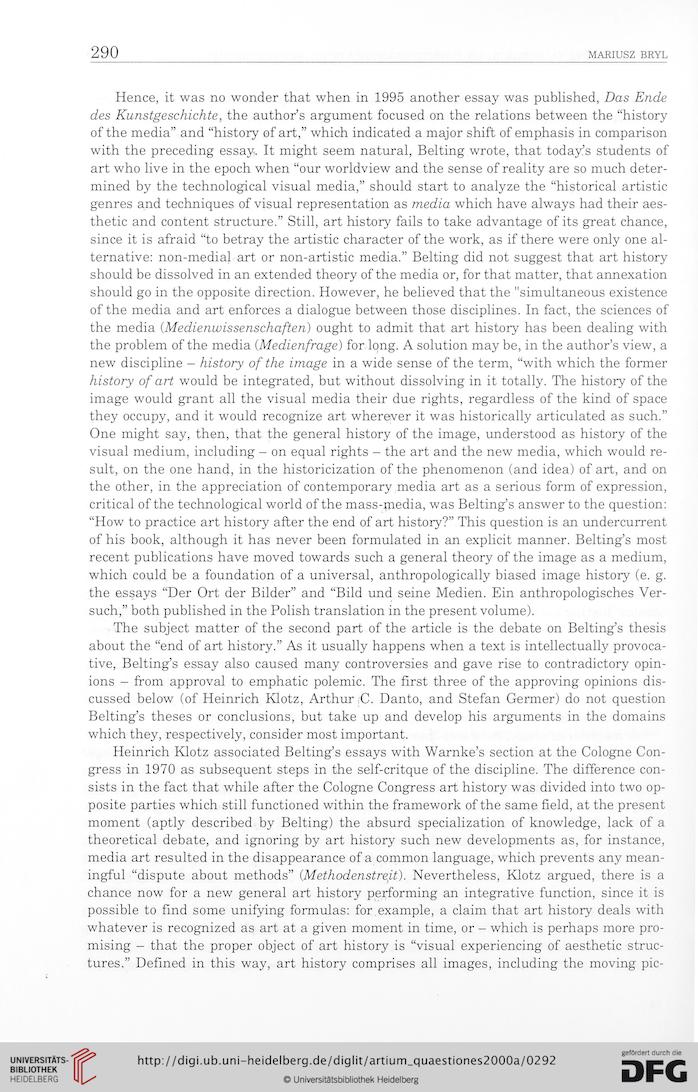 Hence, it was no wonder that when in 1995 another essay was published, Das Ende
des Kunstgeschichte, the author’s argument focused on the relations between the “history
of the media” and “history of art,” which indicated a major shift of emphasis in comparison
with the preceding essay. It might seem natural, Belting wrote, that today’s students of
art who live in the epoch when “our worldview and the sense of reality are so much deter-
mined by the technological visual media,” should start to analyze the “historical artistic
genres and techniąues of visual representation as media which have always had their aes-
thetic and content structure.” Still, art history fails to take advantage of its great chance,
sińce it is afraid “to betray the artistic character of the work, as if there were only one al-
ternative: non-medial art or non-artistic media.” Belting did not suggest that art history
should be dissolved in an extended theory of the media or, for that matter, that annexation
should go in the opposite direction. However, he believed that the "simultaneous existence
of the media and art enforces a dialogue between those disciplines. In fact, the Sciences of
the media (Medienwissenschaften) ought to admit that art history has been dealing with
the problem of the media (Medienfrage) for long. A solution may be, in the author’s view, a
new discipline - history of the image in a wide sense of the term, “with which the former
history of art would be integrated, but without dissolving in it totally. The history of the
image would grant all the visual media their due rights, regardless of the kind of space
they occupy, and it would recognize art whereyer it was historically articulated as such.”
One might say, then, that the generał history of the image, understood as history of the
yisual medium, including - on eąual rights - the art and the new media, which would re-
sult, on the one hand, in the historicization of the phenomenon (and idea) of art, and on
the other, in the appreciation of contemporary media art as a serious form of expression,
critical of the technological world of the mass-piedia, was Belting’s answer to the ąuestion:
“How to practice art history after the end of art history?” This ąuestion is an undercurrent
of his book, although it has never been formulated in an explicit manner. Belting’s most
recent publications have moved towards such a generał theory of the image as a medium,
which could be a foundation of a universal, anthropologically biased image history (e. g.
the essays “Der Ort der Bilder” and “Bild und seine Medien. Ein anthropologisches Ver-
such,” both published in the Polish translation in the present volume).
The subject matter of the second part of the article is the debate on Belting’s thesis
about the “end of art history.” As it usually happens when a text is intellectually provoca-
tive, Belting’s essay also caused many controversies and gave rise to contradictory opin-
ions - from approval to emphatic polemic. The first three of the approving opinions dis-
cussed below (of Heinrich Klotz, Arthur C. Danto, and Stefan Germer) do not ąuestion
Belting’s theses or conclusions, but take up and develop his arguments in the domains
which they, respectively, consider most important.
Heinrich Klotz associated Belting’s essays with Warnke’s section at the Cologne Con-
gress in 1970 as subseąuent steps in the self-critąue of the discipline. The difference con-
sists in the fact that while after the Cologne Congress art history was divided into two op-
posite parties which still functioned within the framework of the same field, at the present
moment (aptly described by Belting) the absurd specialization of knowledge, lack of a
theoretical debate, and ignoring by art history such new developments as, for instance,
media art resulted in the disappearance of a common language, which prevents any mean-
ingful “dispute about methods” (Methodenstre,it). Nevertheless, Klotz argued, there is a
chance now for a new generał art history performing an integrative function, sińce it is
possible to find some unifying formulas: for example, a claim that art history deals with
whatever is recognized as art at a given moment in time, or - which is perhaps morę pro-
mising - that the proper object of art history is “visual experiencing of aesthetic struc-
tures.” Defined in this way, art history comprises all images, including the moving pic-