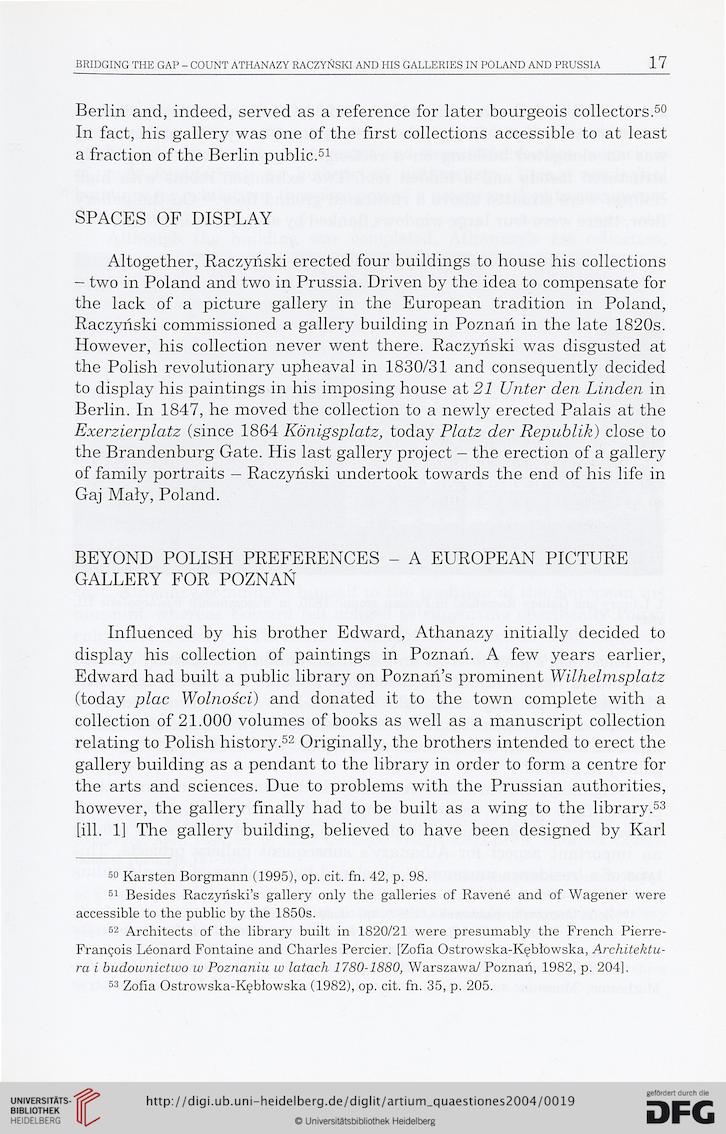 Berlin and, indeed, served as a reference for later bourgeois collectors.50
In fact, his gallery was one of the first collections accessible to at least
a fraction of the Berlin public.51

SPACES OF DISPLAY
Altogether, Raczyński erected four buildings to house his collections
- two in Poland and two in Prussia. Driven by the idea to compensate for
the lack of a picture gallery in the European tradition in Poland,
Raczyński commissioned a gallery building in Poznań in the late 1820s.
However, his collection never went there. Raczyński was disgusted at
the Polish revolutionary upheaval in 1830/31 and consequently decided
to display his paintings in his imposing house at 21 Unter den Linden in
Berlin. In 1847, he moved the collection to a newly erected Palais at the
Exerzierplatz (since 1864 Königsplatz, today Platz der Republik) close to
the Brandenburg Gate. His last gallery project - the erection of a gallery
of family portraits - Raczyński undertook towards the end of his life in
Gaj Maly, Poland.

BEYOND POLISH PREFERENCES - A EUROPEAN PICTURE
GALLERY FOR POZNAŃ

Influenced by his brother Edward, Athanazy initially decided to
display his collection of paintings in Poznań. A few years earlier,
Edward had built a public library on Poznah’s prominent Wilhelmsplatz
(today plac Wolności) and donated it to the town complete with a
collection of 21.000 volumes of books as well as a manuscript collection
relating to Polish history.52 Originally, the brothers intended to erect the
gallery building as a pendant to the library in order to form a centre for
the arts and sciences. Due to problems with the Prussian authorities,
however, the gallery finally had to be built as a wing to the library.53
[ill. 1] The gallery building, believed to have been designed by Karl