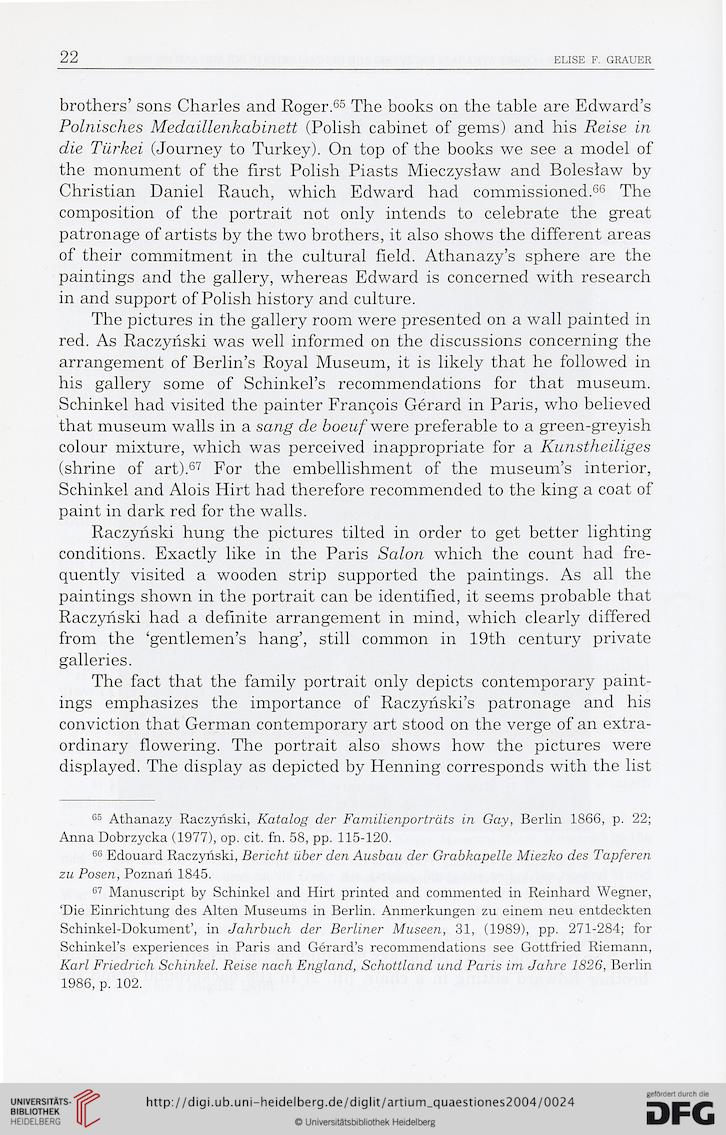 brothers’ sons Charles and Roger.65 The books on the table are Edward’s
Polnisches Medaillenkabinett (Polish cabinet of gems) and his Reise in
die Tiii'kei (Journey to Turkey). On top of the books we see a model of
the monument of the first Polish Piasts Mieczysław and Bolesław by
Christian Daniel Rauch, which Edward had commissioned.66 The
composition of the portrait not only intends to celebrate the great
patronage of artists by the two brothers, it also shows the different areas
of their commitment in the cultural field. Athanazy’s sphere are the
paintings and the gallery, whereas Edward is concerned with research
in and support of Polish history and culture.
The pictures in the gallery room were presented on a wall painted in
red. As Raczyński was well informed on the discussions concerning the
arrangement of Berlin’s Royal Museum, it is likely that he followed in
his gallery some of Schinkel’s recommendations for that museum.
Schinkel had visited the painter François Gérard in Paris, who believed
that museum walls in a sang de boeuf were preferable to a green-greyish
colour mixture, which was perceived inappropriate for a Kunstheiliges
(shrine of art).67 For the embellishment of the museum’s interior,
Schinkel and Alois Hirt had therefore recommended to the king a coat of
paint in dark red for the walls.
Raczyński hung the pictures tilted in order to get better lighting
conditions. Exactly like in the Paris Salon which the count had fre-
quently visited a wooden strip supported the paintings. As all the
paintings shown in the portrait can be identified, it seems probable that
Raczyński had a definite arrangement in mind, which clearly differed
from the ‘gentlemen’s hang’, still common in 19th century private
galleries.
The fact that the family portrait only depicts contemporary paint-
ings emphasizes the importance of Raczynski’s patronage and his
conviction that German contemporary art stood on the verge of an extra-
ordinary flowering. The portrait also shows how the pictures were
displayed. The display as depicted by Henning corresponds with the list