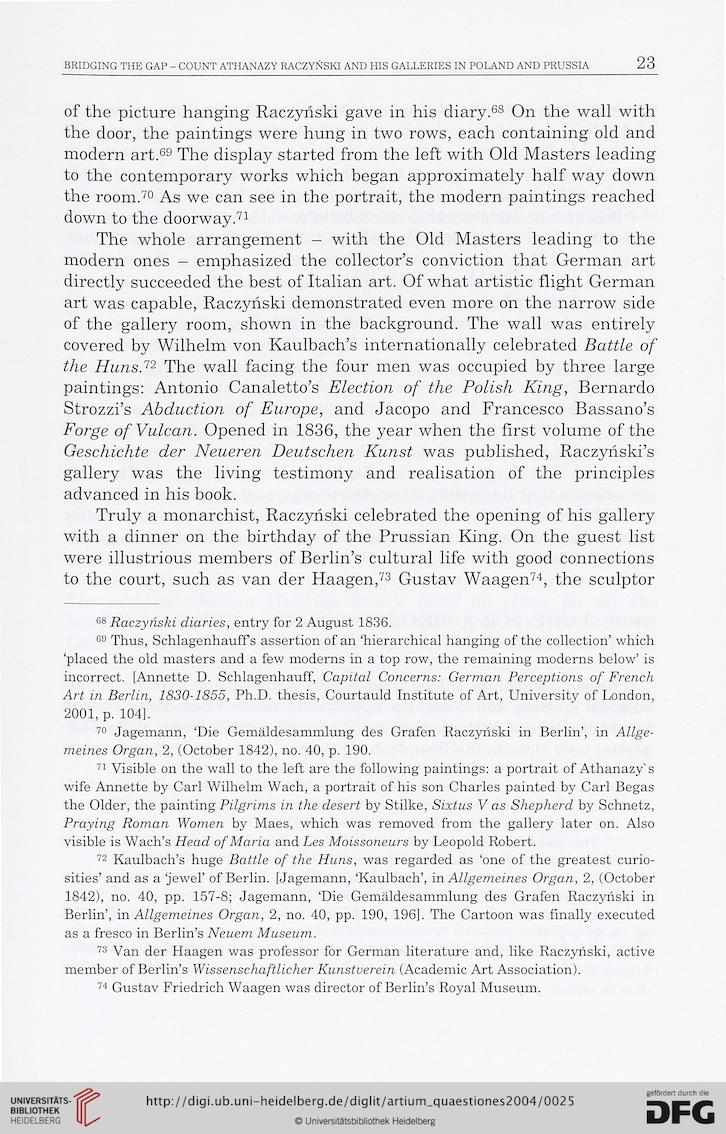 of the picture hanging Raczyński gave in his diary.68 On the wall with
the door, the paintings were hung in two rows, each containing old and
modern art.69 The display started from the left with Old Masters leading
to the contemporary works which began approximately half way down
the room.70 As we can see in the portrait, the modern paintings reached
down to the doorway.71
The whole arrangement - with the Old Masters leading to the
modern ones - emphasized the collector’s conviction that German art
directly succeeded the best of Italian art. Of what artistic flight German
art was capable, Raczyński demonstrated even more on the narrow side
of the gallery room, shown in the background. The wall was entirely
covered by Wilhelm von Kaulbach’s internationally celebrated Battle of
the Huns.12 The wall facing the four men was occupied by three large
paintings: Antonio Canaletto’s Election of the Polish King, Bernardo
Strozzi’s Abduction of Europe, and Jacopo and Francesco Bassano’s
Forge of Vulcan. Opened in 1836, the year when the first volume of the
Geschichte der Neueren Deutschen Kunst was published, Raczyfiski’s
gallery was the living testimony and realisation of the principles
advanced in his book.
Truly a monarchist, Raczyński celebrated the opening of his gallery
with a dinner on the birthday of the Prussian King. On the guest list
were illustrious members of Berlin’s cultural life with good connections
to the court, such as van der Haagen,73 Gustav Waagen74, the sculptor

68 Raczyński diaries, entry for 2 August 1836.
09 Thus, Schlagenhauffs assertion of an ‘hierarchical hanging of the collection’ which
‘placed the old masters and a few moderns in a top row, the remaining moderns below’ is
incorrect. [Annette D. Schlagenhauff, Capital Concerns: German Perceptions of French
Art in Berlin, 1830-1855, Ph.D. thesis, Courtauld Institute of Art, University of London,
2001, p. 104],
70 Jagemann, ‘Die Gemäldesammlung des Grafen Raczyński in Berlin’, in Allge-
meines Organ, 2, (October 1842), no. 40, p. 190.
71 Visible on the wall to the left are the following paintings: a portrait of Athanazy's
wife Annette by Carl Wilhelm Wach, a portrait of his son Charles painted by Carl Begas
the Older, the painting Pilgrims in the desert by Stilke, Sixtus V as Shepherd by Schnetz,
Praying Roman Women by Maes, which was removed from the gallery later on. Also
visible is Wach’s Head of Maria and Les Moissoneurs by Leopold Robert.
72 Kaulbach’s huge Battle of the Huns, was regarded as ‘one of the greatest curio-
sities’ and as a ‘jewel’ of Berlin. [Jagemann, ‘Kaulbach’, in Allgemeines Organ, 2, (October
1842), no. 40, pp. 157-8; Jagemann, ‘Die Gemäldesammlung des Grafen Raczyński in
Berlin’, in Allgemeines Organ, 2, no. 40, pp. 190, 196], The Cartoon was finally executed
as a fresco in Berlin’s Neuem Museum.
73 Van der Haagen was professor for German literature and, like Raczyński, active
member of Berlin’s Wissenschaftlicher Kunstverein (Academic Art Association).
74 Gustav Friedrich Waagen was director of Berlin’s Royal Museum.