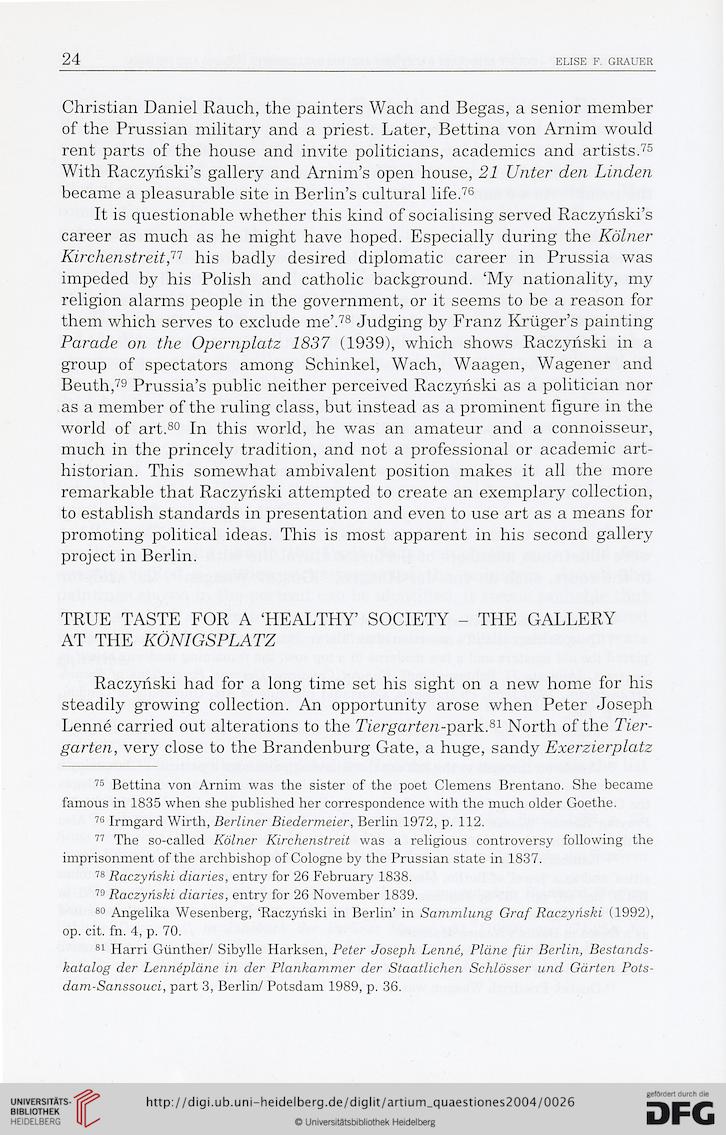 Christian Daniel Rauch, the painters Wach and Begas, a senior member
of the Prussian military and a priest. Later, Bettina von Arnim would
rent parts of the house and invite politicians, academics and artists.75
With Raczynski’s gallery and Arnim’s open house, 21 Unter den Linden
became a pleasurable site in Berlin’s cultural life.76
It is questionable whether this kind of socialising served Raczyhski’s
career as much as he might have hoped. Especially during the Kölner
Kirchenstreit,11 his badly desired diplomatic career in Prussia was
impeded by his Polish and catholic background. ‘My nationality, my
religion alarms people in the government, or it seems to be a reason for
them which serves to exclude me’.78 Judging by Franz Krüger’s painting
Parade on the Opernplatz 1837 (1939), which shows Raczyński in a
group of spectators among Schinkel, Wach, Waagen, Wagener and
Beuth,79 Prussia’s public neither perceived Raczyński as a politician nor
as a member of the ruling class, but instead as a prominent figure in the
world of art.80 In this world, he was an amateur and a connoisseur,
much in the princely tradition, and not a professional or academic art-
historian. This somewhat ambivalent position makes it all the more
remarkable that Raczyński attempted to create an exemplary collection,
to establish standards in presentation and even to use art as a means for
promoting political ideas. This is most apparent in his second gallery
project in Berlin.

TRUE TASTE FOR A ‘HEALTHY’ SOCIETY - THE GALLERY
AT THE KÖNIGSPLATZ
Raczyński had for a long time set his sight on a new home for his
steadily growing collection. An opportunity arose when Peter Joseph
Lenné carried out alterations to the Tiergarten-park.81 North of the Tier-
garten, very close to the Brandenburg Gate, a huge, sandy Exerzierplatz
75 Bettina von Arnim was the sister of the poet Clemens Brentano. She became
famous in 1835 when she published her correspondence with the much older Goethe.
7G Irmgard Wirth, Berliner Biedermeier, Berlin 1972, p. 112.
77 The so-called Kölner Kirchenstreit was a religious controversy following the
imprisonment of the archbishop of Cologne by the Prussian state in 1837.
78 Raczyński diaries, entry for 26 February 1838.
79 Raczyński diaries, entry for 26 November 1839.
80 Angelika Wesenberg, ‘Raczyński in Berlin’ in Sammlung Graf Raczyński (1992),
op. cit. fn. 4, p. 70.
81 Harri Günther/ Sibylle Harksen, Peter Joseph Lenné, Pläne für Berlin, Bestands-
katalog der Lennepläne in der Plankammer der Staatlichen Schlösser und Gärten Pots-
dam-Sanssouci, part 3, Berlin/ Potsdam 1989, p. 36.