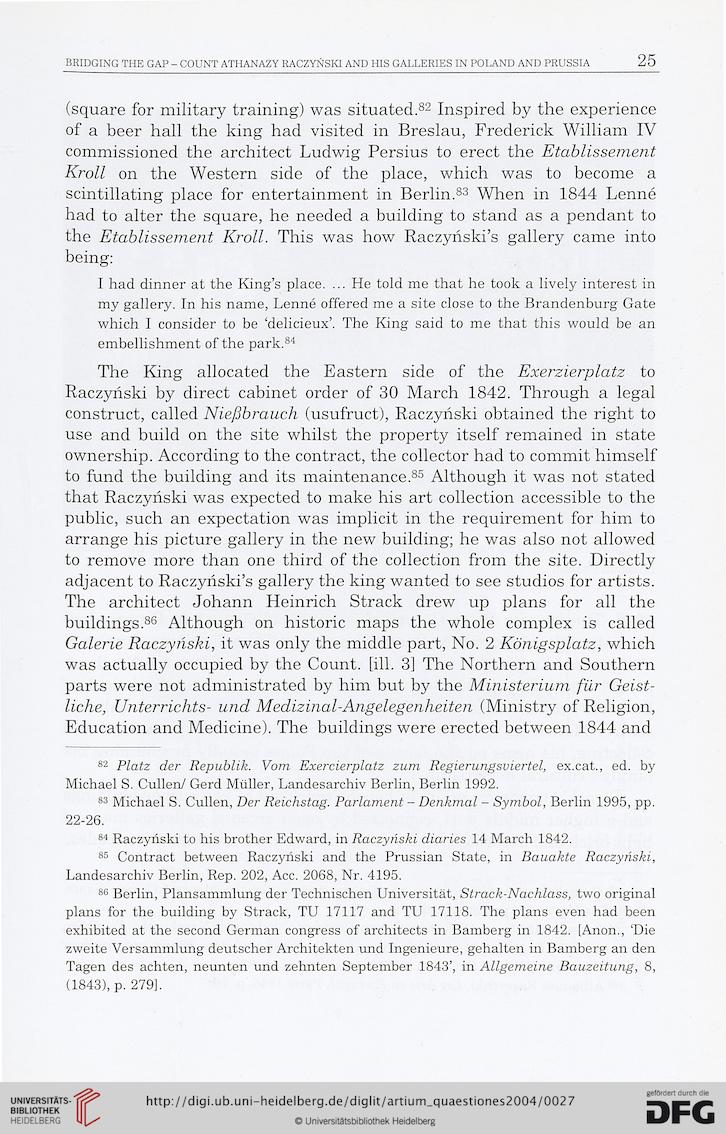 (square for military training) was situated.82 Inspired by the experience
of a beer hall the king had visited in Breslau, Frederick William IV
commissioned the architect Ludwig Persius to erect the Etablissement
Kroll on the Western side of the place, which was to become a
scintillating place for entertainment in Berlin.83 When in 1844 Lenné
had to alter the square, he needed a building to stand as a pendant to
the Etablissement Kroll. This was how Raczyhski’s gallery came into
being:
I had dinner at the King’s place. ... He told me that he took a lively interest in
my gallery. In his name, Lenné offered me a site close to the Brandenburg Gate
which I consider to be ‘délicieux’. The King said to me that this would be an
embellishment of the park.84
The King allocated the Eastern side of the Exerzierplatz to
Raczyński by direct cabinet order of 30 March 1842. Through a legal
construct, called Nießbrauch (usufruct), Raczyński obtained the right to
use and build on the site whilst the property itself remained in state
ownership. According to the contract, the collector had to commit himself
to fund the building and its maintenance.85 Although it was not stated
that Raczyński was expected to make his art collection accessible to the
public, such an expectation was implicit in the requirement for him to
arrange his picture gallery in the new building; he was also not allowed
to remove more than one third of the collection from the site. Directly
adjacent to Raczyhski’s gallery the king wanted to see studios for artists.
The architect Johann Heinrich Strack drew up plans for all the
buildings.86 Although on historic maps the whole complex is called
Galerie Raczyński, it was only the middle part, No. 2 Königsplatz, which
was actually occupied by the Count, [ill. 3] The Northern and Southern
parts were not administrated by him but by the Ministerium für Geist-
liche, Unterrichts- und Medizinal-Angelegenheiten (Ministry of Religion,
Education and Medicine). The buildings were erected between 1844 and