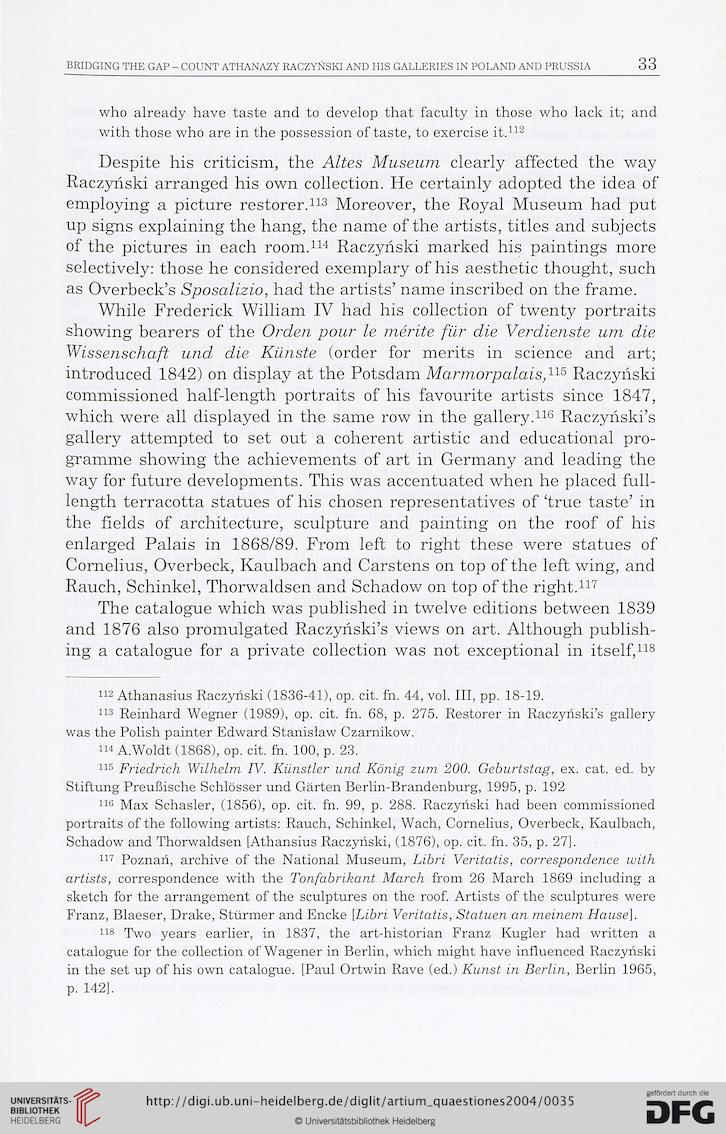 who already have taste and to develop that faculty in those who lack it; and
with those who are in the possession of taste, to exercise it.112
Despite his criticism, the Altes Museum clearly affected the way
Raczyński arranged his own collection. He certainly adopted the idea of
employing a picture restorer.113 Moreover, the Royal Museum had put
up signs explaining the hang, the name of the artists, titles and subjects
of the pictures in each room.114 Raczyński marked his paintings more
selectively: those he considered exemplary of his aesthetic thought, such
as Overbeck’s Sposalizio, had the artists’ name inscribed on the frame.
While Frederick William IV had his collection of twenty portraits
showing bearers of the Orden pour le mérite für die Verdienste um die
Wissenschaft und die Künste (order for merits in science and art;
introduced 1842) on display at the Potsdam Marmorpalais,115 Raczyński
commissioned half-length portraits of his favourite artists since 1847,
which were all displayed in the same row in the gallery.116 Raczyński’s
gallery attempted to set out a coherent artistic and educational pro-
gramme showing the achievements of art in Germany and leading the
way for future developments. This was accentuated when he placed full-
length terracotta statues of his chosen representatives of ‘true taste’ in
the fields of architecture, sculpture and painting on the roof of his
enlarged Palais in 1868/89. From left to right these were statues of
Cornelius, Overbeck, Kaulbach and Carstens on top of the left wing, and
Rauch, Schinkel, Thorwaldsen and Schadow on top of the right.117
The catalogue which was published in twelve editions between 1839
and 1876 also promulgated Raczyfiski’s views on art. Although publish-
ing a catalogue for a private collection was not exceptional in itself,118